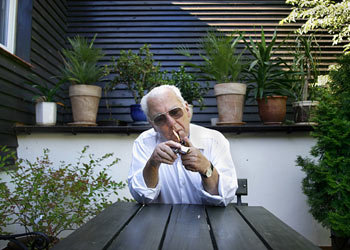 During his busy professional life, Toeplitz distinguished himself as a polymath within the cultural realm: he has been a journalist, film critic, commentator, TV host, an author of several books, as well as a screenplay writer.

Already in the 1950s, TKK (as he would sign his feuilletonist articles later on) began working as a journalist for the magazines Nowa Kultura and Przegląd Kultury, respectively. Among others, he was chief editor for the magazine Szpilki (1969-1975) and for the daily newspaper Nowa Europa in the 1990s. Until his last days he wrote columns for the weekly magazine Przegląd.

Having served as dramatic chief adviser for Jerzy Kawalerowicz’s film production firm Kadr, his penchant for the motion picture seems to have been a long life reflection of his career. During the 1960s he hosted two TV shows, and beyond that made his mark as a theatrical and screenplay writer.

There had always been a politically committed side in Toeplitz’s life. As a member of the Polish United Workers’ Party (PZPR), TKK has been affiliated with left-wing political ideas and participated in the so-called “Round Table” talks to negotiate the role of the Polish mass media in 1989. In 2004 he ran – rather unsuccessfully – for the European Parliament for the Democratic Left Alliance (SdPI).

From the 1960s until his last days, Toeplitz had managed to become an appreciated writer and cultural critic. With his book Sztuka komiksu (Comic Arts) in 1985, he pioneered the idea that comic strips can be works of art in Poland.

Toeplitz was born on 28 February 1933 in Otrębusy, nearby Pruszków, as a member of a polonized Jewish family.