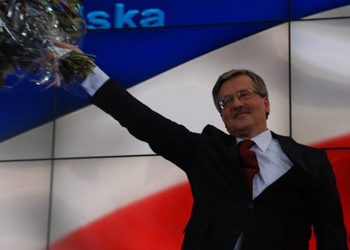 This weekend, the ruling Civic Platform (PO) party named its candidate for the presidency in an online and postal vote by just under half of the party’s 46,000 members. Bronisław Komorowski, the speaker of the Polish Sejm (parliament), will campaign as the PO candidate in the 2010 presidential elections in October.

The presidential primary was essentially a contest between two men: Mr. Komorowski and Foreign Minister Radosław Sikorski. Mr. Komorowski received a clear majority of the vote, with 68.5 percent to Mr. Sikorski’s 31.5 percent. However, only 47.7 percent of the party’s eligible voters even took part.

The two contenders faced off in a debate last Sunday, and though they agreed on many of the discussed issues, the Polish media generally declared Mr. Komorowski the overall winner. The speaker stressed the depth of his experience compared to the younger and politically greener Mr. Sikorski. The 58-year-old gained his first political experience in the anti-communist resistance movement in the 1980s, for which he was imprisoned, and later served as minister of defence. Mr. Komorowski’s qualifications particularly won him the favour of older party members.

Upon being named the PO candidate on Sunday, Mr. Komorowski pledged to work together with the Tusk government, saying that the country needs someone “who helps and doesn’t disturb, doesn’t block this modernisation process,” an obvious dig at incumbent President Lech Kaczyński. Recent opinion polls show Mr. Komorowski ahead of the current president.