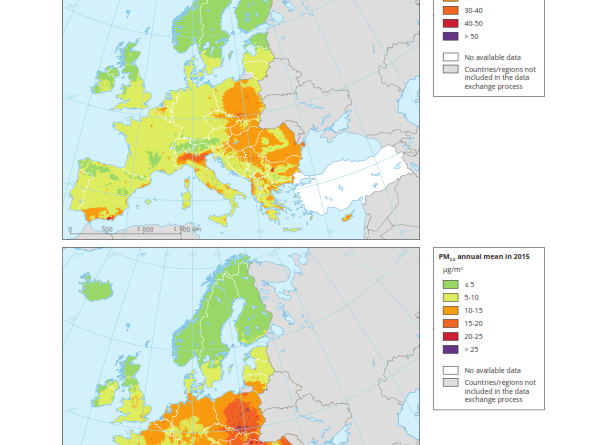 The European Environment Agency has released a new report examining air pollution across the continent, and the results for Poland are grim.

The report, Air Quality in Europe 2018, was published on 29 October and relies on data collected up to 2016 from around 2,500 cities in 41 countries. The authors examined the levels of several pollutants which are dangerous for humans, including PM10 and PM2.5 – microscopic particles produced mainly by burning fossil fuels which can cause DNA mutations, heart attacks, respiratory disease, adverse pregnancy outcomes, and premature death.

As seen on the map above, Poland remains one of the most toxic places on the continent – especially southern Poland, where Krakow is located.

The report was also damning when it comes to Benzo[a]pyrene (BaP), a carcinogen created by burning wood, coal, gasoline, and other substances. Of 20 worst cities in Europe for BaP, 19 are in Poland.

The Agency does suggest that the situation in Poland may be marginally improving as a result of government subsidies and other initiatives to replace foul-burning furnaces and other devices with cleaner technology. But it is clear from the report that Poland still has a long way to go.

Remember that you can check the level of smog in Krakow daily in the right sidebar of The Krakow Post website and read our tips on how to protect yourself during the coming winter months, when the danger is highest.