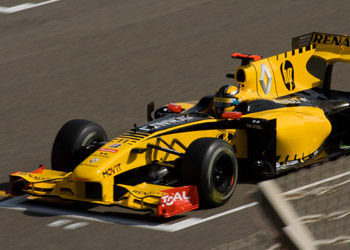 Exceeding even his own expectations, Polish F1 racer Robert Kubica took second place, showing excellent pace and taking advantage of the rainy conditions to move up nine places to take second when Sebastial Vettel crashed out mid-race. While both the points and the prestige are extremely important to the team, whose reputation suffered from scandal last year, Kubica’s optimism for the future is guarded, as he has emphasised strongly that in drier conditions, the team is not ready to compete for podium places — yet.

The race, which took place early in the morning Polish time, was won by McLaren’s Jenson Button for the second year in a row.

Kubica qualified ninth. The slippery conditions resulted in several incidents as the drivers struggled to stay on the track. The race was only Kubica’s second for a Renault team struggling to re-establish itself as a credible competitor and a respectable racing institution. The thrilling result catapulted Kubica to sixth in the drivers’ cup standings and the Renault F1 Team to fourth in the constructors’ cup after receiving no points in Bahrain.

The rain also helped make the Australian race a demonstration that, at least in bad weather, F1 can still be amongst the most thrilling of spectacles. Numerous contact incidents, spills and spins made the race a nail-biter in comparison to the static standings of the Bahrain GP, where the lack of overtaking led to considerable debate over whether the sport would be watchable this year.

Team Renault will be hoping that finishes like Sunday’s will help to erase the memory of last season, which ended in disaster when the team was found guilty of race-fixing after ordering one of their drivers to crash in order to give the other an advantageous place in the standings. The scandal, referred to as “Crashgate” in F1 circles, resulted in the sale of a majority stake in the team as Renault was banned from participation for two years.

Kubica’s previous appearances at the Australian Grand Prix had been less than auspicious, as he missed an opportunity for a podium after briefly leading race winner Jenson Button when he and Sebastial Vettel made contact and landed against a barrier with only three laps to go.

Kubica emphasized that the team is not ready to produce podiums regularly. “To be honest, we were not expecting to finish on the podium,” he said, noting that “we have to stay realistic, we are not up to pace to finish on the podium normally. We need to keep pushing and I am sure sooner or later we will be on pace.

Be sure to read the April edition of the Krakow Post in print, featuring the inside scoop on Kubica in 2010.