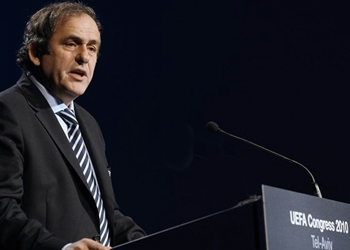 With only 27 months left until the kick-off, preparations for the Euro 2012 football tournament are at full speed and reaching their final stage. According to UEFA, however, efforts still need to be sped up to adhere to the schedule.

On the occasion of the this year’s annual congress of the European Football Association (UEFA) in Tel Aviv, President Michel Platini expressed his concerns about the progress of the final preparations in the two hosting countries, Poland and Ukraine.

In the latter, the two construction sites at Kiev and Lviv are especially worrisome. While the stadium works in Kiev have fallen behind five months, the construction works in Lviv have intermittently come to a halt.

Political inconsistencies, an unusually harsh winter, as well as economic turbulences are amongst the major reasons for the current delay in Ukraine. This in effect points to a questioning of the country’s expertise, as Ukraine has not constructed major building complexes, such as stadiums, since its independence in 1991.

Newly elected President Victor Yanukovich, however, assured that additional measures would be taken and all efforts doubled to finish on time.

Despite having had some interim problems, especially in Wrocław, Poland seems to be back on track and ensured optional support for Ukraine, if needed.

Even though completing the venues for Euro 2012 is the top priority, it isn’t by far the only problem for the hosts. Illegal betting, for which a fraud detection system has been set up, as well the issue of “trafficking of minors” – transfers of young players under 18 – were addressed by the UEFA President.