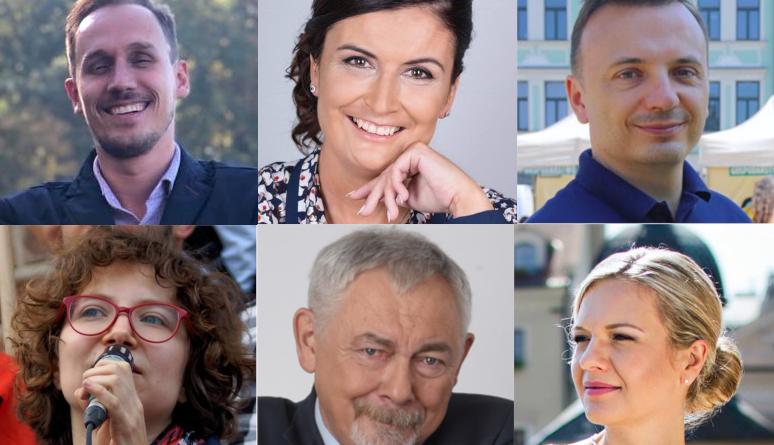 The first round of Krakow’s local elections are less than a week away – next Sunday, 21 October. If you are a citizen of Poland or the wider EU, you can vote. (Find out how.)

Read on for our guide to the candidates for Krakow’s upcoming election for president (mayor), who will serve for five years (one more than previously). The candidates presented here are those with at least 1% support in recent polls, listed in alphabetical order.

The Krakow Post also reached out to all the candidates asking what their platforms offer specifically to foreigners living and working in Krakow. We have received replies only from Łukasz Gibała and Jacek Majchrowski. We will update this article with any additional replies we receive.

Stay tuned on more details for where and how to vote.

Now… on to the mayoral candidates!

Konrad Berkowicz represents the conservative-libertarian Wolność (“Liberty”) party, of which he is the vice president. He’s a graduate of AGH (in Computer Science) and the University of Warsaw (Philosophy). He is quite well known for his strong opinions against rival candidates: “Krakow deserves something more than a president who should go to jail”.

In interviews, Berkowicz often discusses lowering taxes, fighting bureaucracy, and cancelling all the limits on commerce – such as the restrictions on alcohol sales. He proposes additional police patrols to increase social trust towards uniformed services in general. He also wants to develop green spaces (sensitively for allergy sufferers).

Berkowicz is closely affiliated with Polish politician Janusz Korwin-Mikke, for whom he was once a spokesman. Korwin-Mikke has a small but dedicated following for his outspoken libertarian views, but is controversial for positions such as wanting to reinstate a monarchy and claiming that women are weaker and less intelligent than men.

Jolanta Gajęcka is associated with the right-wing populist KUKIZ’15 party founded by former musician/actor Paweł Kukiz. In her professional career, she was first working as a pedagogue, and then as headmaster of the second elementary school in Krakow, the city’s oldest.

She strongly believes in citizen’s rights to access city information and power. In her program she speaks about a close cooperation with Cracovians via various referendums and social consultations. She also prioritizes fighting against smog, though disagrees with the idea of the free transportation. She believes that tax breaks for Krakow citizens will motivate them to support the city budget.

Łukasz Gibała is the head of the center-left Logiczna Alternatywa society (“Logical Alternative”) which also corresponds with his slogan in this election – “the logical choice”. Łukasz Gibała is also a Doctor of Philosophy and a businessman, taking part in the elections for the second time now.

Łukasz Gibała comes from a wealthy family and is quite famous for his lavish campaigns. The last one cost over 1 million PLN, and some accuse him of skirting campaign finance laws. He often promotes himself during press conferences in luxurious hotels and pays for special social campaigns, such as the anti-smog march. The candidate doesn’t consider it a negative though – he believes it actually makes him a better and more trustworthy candidate. He mentions that he has the option to spend his days relaxing in the Bahamas, but he prefers to cultivate his career as a politician in order to help the city and its citizens.

KP: If elected, what will you do to help foreigners living and working in Krakow?

ŁG: In my vision, Krakow is friendly for all its inhabitants, including foreigners. I’m going to lower costs of living in our city, so I hope that many people will register residency here and decide to stay in Krakow. If so, they can benefit from free public transport, lower costs of heating, waste disposal, etc. As the mayor of Krakow, I will also work with the municipal council to remove all barriers, which are currently hindering foreign citizens.

Additionally, I’ll do my best to make our city full of joy. It’s one of my core electoral demands. I believe that, as a result, many foreigners will become permanent inhabitants of Krakow. I am open to their suggestions, and I will create a special branch in the  municipality to gather information about the problems and needs of foreigners in Krakow.

Daria Gosek-Popiołek is a local activist representing the relatively new social democratic Partia Razem (Together Party) as well as its local affiliate Razem dla Krakowa, and for council she lists candidates from Common City and who are unaffiliated.

Daria Gosek-Popiołek is a member of a city innovation team created by Jacek Majchrowski. She is also an ambassador of this year’s Citizen Budget. Razem supports gender and sexual equality and representation, strong environmental initiatives (and more limited urban development), greater worker rights, fairer housing practices, a tram on Aleja, improved sexual education in schools, and funding for controversial in vitro procedures.

Currently she is a 33-year old manager of the House of Culture in Nowa Huta. She obtained a Polish Philology degree from Jagiellonian University.

Jacek Majchrowski, 71, has been the mayor of Krakow since 2002, serving for four terms. Before that, he was the governor of the erstwhile Krakow voivodeship and a widely-published professor of Law at Jagiellonian University. He is not formally affiliated with any political party, having resigned from the Democratic Left Alliance (SLD) after first being elected to his current position. However, he is generally supported by centrist Polish People’s Party and cooperates with the center-right Civic Platform (Platforma/PO) party and the Modern Party (Nowoczesna).

Since Majchrowski’s first election 16 years ago, Krakow has been radically transformed as Poland has become an economically thriving member of the European Union. Majchrowski has overseen a boom in tourism, the expansion of the tram system and the Krakow-Balice airport, significant renovation of the Old Town, and large-scale development projects such as the ICE Congress Center and the Tauron Arena (the largest of its kind in Poland). He has won all of his reelection campaigns by a wide margin and is frequently mentioned as a potential candidate for the Polish presidency.

On the other hand, Majchrowski’s critics say he has not done enough to reduce traffic congestion in Krakow or to curb the levels of smog, which annually in winter is among the worst in the world. Perhaps the most common criticism is that his development policies have proven (at best) overzealous or (at worst) corrupt. The president also endured a scandal in 2006-7 over enormous unpaid bills for a hotel room which he supposedly used for private meetings, and he was criticized for supporting a bid for Krakow to host the 2022 Winter Olympics which was rejected by nearly 70% of voters in a 2014 city referendum. In general, opponents accuse Majchrowski of making the same promises every election year without acting on them, such as the controversial idea to build a metro – or, more recently, of co-opting ideas from more leftist parties.

KP: If elected, what will you do to help foreigners living and working in Krakow?

A spokesperson for Majchrowski sent us a quite long answer in Polish listing some of the various cultural events in Krakow in English, Spanish, and Ukrainian which enjoy sponsorship form the city, information points for foreigners, and Krakow’s Entrepreneurship and Economic Development Support Program, which is run by the Polish-Ukrainian Cooperation Foundation “U-WORK”.

Małgorzata Wassermann represents the national-conservative PiS (Law and Justice) party, which currently controls the national government. She is the daughter of politician Zbigniew Wassermann, who died in the Smolensk air disaster of 2010. She is a member of the Sejm (lower house of parliament), most notable for heading its investigation into the massive Amber Gold pyramid scheme which defrauded investors of millions before its spectacular collapse in 2012.

Wassermann promotes herself with slogans such as “new president, more possibilities” and “first bread, then circuses”. In fact, she has many vivid ideas to implement, most of them quite expensive. To fund these projects, she plans to get donations for festivals and cultural events.

Many of her programs are focused on children. Not only does she want to create a place in nurseries and kindergarten for every child in the city, but also to give a free access to psychologist, speech therapist, and pedagogue in every kindergarten (currently this is only possible in medical centers). She plans to increase the number of vacancies in schools for the pedagogues, provide additional places for English teachers, fund more extracurricular activities for children, and increase bonuses for teachers. By the time she finishes her term of office, she would like to see dentist offices in kindergartens as well.

Along with criticizing the scope of her promises, many of her opponents call her a hypocrite – especially when she accuses Jacek Majchrowski of overdevelopment, as she voted to ease restrictions on logging and proposes opening a marina and bay for the yachts by the Vistula River, building a metro in Krakow, and constructing a new hospital in Krakow. Opponents also say she was too aggressive in her conduct during the Amber Gold investigation (although supporters champion this as strength). In response, Wassermann claims that she would like to show herself from a different perspective when it comes to her future as president.

What about the city council?

You can also vote to fill Krakow’s 43 city council seats. However, there are over 300 candidates and we have not been able to obtain reliable information about all of them.

If you’re not sure who to vote for, remember that, in a proportional voting system, a vote for an individual candidate is essentially a vote for that candidate’s party – so learning about the presidential candidates and their parties may provide a decent idea of what you can expect from the council candidates.

You can find out who is running to represent your electoral district in the city council here.

Not sure what your electoral district is? Follow the steps below to find out:

Steven Hoffman and Vera Starling contributed to this article.