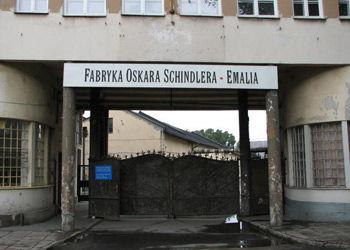 Lipowa 4, the first Polish-produced educational documentary dealing with the story of Schindler’s Factory, premiered Sunday 14 March in the former administrative building of the Deutsche Emaliwarenfabrik in Podgórze, now a branch of the Historical Museum of the City of Krakow.

The documentary was shown simultaneously on two screens before a large audience including dozens of Jews who had flown to Krakow to commemorate the 67th anniversary of the liquidation of the Krakow ghetto, an event that is traditionally concluded with a march in honour of the fallen.

The interiors of the famed factory, which holds a powerful grip on the popular imagination thanks to Thomas Keneally’s novel Schindler’s Ark and Steven Spielberg ‘s subsequent film Schindler’s List (1993), were evoked by the old Emalia S.A. works in the county of Olkusz. The producers of Lipowa 4 decided to film the machinery there because of its resemblance to the tools used at Schindler’s Factory to produce enamel vessels.

Olkusz is sadly remembered by Polish historians for being the place of the so-called “Bloody Wednesday” in reference to the retaliatory execution of 20 Poles perpetrated by Nazis, following the shooting of a German officer in July 1940.

The documentary is mainly built upon the testimonies of four former workers of the factory. With the exception of Mordechaj Lustig, who currently lives in Israel, all the ex-employees involved in the project attended the premiere. After the screening, Stanisław Załubski, Stanisław Borowski and Maria Ogiegło-Orlinska took the floor adding other details related to their work in Schindler’s Factory

“I clearly remember that several Poles used to spare the rest of their meals in order to give to the hungrier Jewish workers an extra portion of food at lunch break,” reported Stanisław Załubski, stressing the general sense of solidarity that predominated between Polish and Jewish workers.

“Unfortunately, the production budget didn’t allow us to film in Israel, where most of the survivors currently reside,” said Joanna Marszałek, the history consultant involved in the making of Lipowa 4. The producers invited Mordechaj Lustig to stay in Krakow for the duration of the filming.

“However, we are proud of the final result, especially considering that this is the first attempt to narrate the story of Schinder’s Factory from the Polish point of view,” she added, echoing the words of the director of the Historical Museum of the City of Krakow, Michał Niezabitowski who financed the project.

Later this summer, a major interactive exhibition chronicling Krakow’s occupation will open on the site as a permanent part of the museum.

Lipowa 4 was directed by Marcin Kaproń, co-founder with Ania Pankiewicz of the independent film studio AnialkaTeam, responsible for the making of digital animated films and short documentaries including some episodes of “Nowa Huta Newsreel”, a weekly seven-minute chronicle devoted to the local life of the Nowa Huta district.