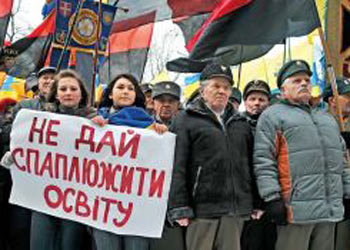 Faced with widespread protests and calls for his resignation, Dmytro Tabachnyk, Ukraine’s new education and science minister, said he would keep his highly controversial ideas about the country’s history to himself. Tabachnyk also promised not to backpedal on progressive educational reforms that have already been introduced.

“Ukraine’s education system will not be influenced by my personal views on the country’s history,” Tabachnyk told the Kyiv Post on March 17. “I will strictly follow the policy of President (Viktor) Yanukovych, the Cabinet of Ministers and will adhere to the Constitution. I am not crazy. The Bologna education system and independent testing are the only ways to develop our system of education. I won’t cancel them. I will only improve and modernize them.”