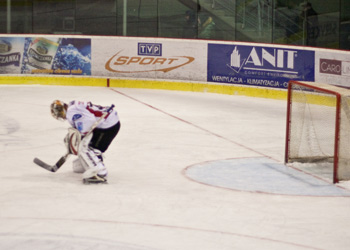 Cracovia Comarch’s ice hockey squad was unable to stop the momentum of their fiercest rivals, Wojas Podhale Nowy Targ in a tense, emotional fourth match on Podhale’s home ice in Nowy Targ. For Podhale, the series followed a tight, dramatic seven-game series with GKS Tychy, while Cracovia came into the final unbeaten in the first two rounds of the playoffs.

The amusingly inappropriately nicknamed “Daisies” of Nowy Targ won four in a row to take the 19th Polish title in their club’s history. The final series was the first such confrontation between the two clubs, and the great expectations of Cracovia’s fans were crushed by Podhale’s remarkable grit and uncompromising defence.

Wednesday’s match ended 1:2 for Podhale, with Cracovia’s only goal coming off a bungled attempt to catch an off-target shot by Podhale’s goaltender Krzysztof Zborowski.

Cracovia can attribute the lost series to a combination of their own errors and Podhale’s strong, balanced play in all four games. Cracovia suffered from uncharacteristically sloppy passing and difficulty in winning the puck in scrums in the corners, a problem aggravated by several disastrous goaltending errors.

Cracovia’s goaltending woes surprisingly came from top tender Rafał Radziszewski, who has minded the net for the club on the road to three championships in the past four years. Radziszewski swept a puck into his own net in game one, and lost one behind his back, allowing it to trickle across the line in game two. Game three saw Marek Rączka between the pipes for Cracovia, and Radziszewski returned to action for game four to put on a solid performance, only to be outdone by the consistently excellent Podhale keeper Zborowski.

Podhale, which is in financial limbo after losing their sponsor last year, will be hoping that the victory will help to secure backing comparable to that enjoyed by Cracovia, who is financed by the well-heeled Polish computer technology firm Comarch. For Cracovia, the loss raises additional questions about their proposed move to join the Austrian Eishockey league in search of tougher competitors.