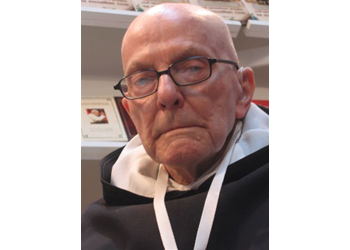 In spite of the fact that his last winter had been a trying one – breaking his leg and losing his sight – he was cracking jokes until the very last.

Father Joachim Badeni was born as Kazimierz Stanisław, into what now seems an impossibly alien world. His grandfather, Kazimierz Badeni, served as prime minister of the Austro-Hungarian Empire, and his father Ludwik also served as a diplomat of the Habsburg crown. The Badenis were an old noble family who had originally come to Poland in the sixteenth century.

Joachim was born in Brussels in 1912, when Emperor Franz Josef still sat on the Habsburg throne. Two years later, at the outbreak of war, the Badenis moved to Switzerland, then to Vienna, where his father died in 1916. Afterwards, he lived with his mother in Busk, which now lies in Ukraine.

Following the First World War – from which Poland reemerged as a sovereign nation – Joachim graduated from school in Żywiec. He and his mother Alice Ancarcrona had moved there upon her marriage with the polonised Archduke Charles Albert of Austria, heir to the Żywiec brewery empire. Joachim moved on to Krakow, where he finished his studies in law at the Jagiellonian University in 1937.

With the outbreak of the Second World War, circumstances led him to Romania, Yugoslavia, Greece, and then France. Joining the Third Arms Company in Brittany, he formed a Polish company and fought in Narvik (Norway), France and Morocco, until he followed Commander Władysław Sikorski to England in 1943.

During this time he met Father Joseph Maria Bochenski, an encounter that awakened him to his spiritual and priestly vocation. He went on to attend a seminary and finally changed his name to Joachim. From then on he devoted himself to the study of theology and was ordained in 1950. During the following decades he filled the position of chaplain in Poznań (1957-1975), Wrocław (1975-1976) and Krakow (1977-1988).

It is within this period that Father Joachim rose up as one of the most dazzling figures of the cloth in Poland – and became increasingly a moral authority to look up to. Amongst others, he co-founded the Krakow University’s pastoral, called “Baczka”, as a spiritual guardian of the nascent movement in Poland (Ruch Odnowy w Duchu Świętym) and succeeded in becoming a respected author.

At the basilica of St. Trinity, family, friends and alumni attended the ceremony on the occasion of Father Joachim’s funeral. Cardinal Stanisław Dziwisz, who said mass, depicted the passing of Father Joachim as a deep loss of a moral and spiritual leader, guided by his love for the Eucharist and driven by his thirst for God.

Moreover, he was posthumously awarded with the Commander’s Cross of the Order for the Rebirth of Poland (Krzyz Komandorski Orderu Odrodzenia Polski) by President Kaczynski.