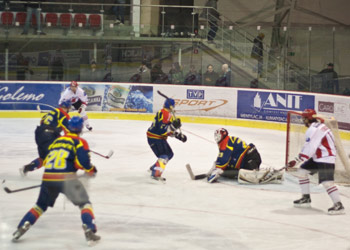 Polish champions Cracovia Ice Hockey looked like anything but in the first three games of the PLH playoffs against Wojas Podhale. Podhale overcame Cracovia again on Wednesday, leaving the series standing officially at 1-3. While Cracovia is credited with one win as a bonus for having won more match-ups with their Małopolska rivals during the regular season — Cracovia had an overwhelming 7-1 record against Podhale — they have not only lost all three games, but have outscored Podhale in only two periods of the final series.

Wednesday night’s game before a packed house in Nowy Targ ended 5:2, as Podhale came out strong and showed no sign of relenting. Standout performances were recorded by forwards Milan Baranyk and Polish rising star Damian Kapica.

Kapica is easily recognised on the ice as the only player wearing full cage over his face, as required by Polish League rules, which demand full-face protection for players under 18. He also makes an impression with his puck handling and scoring instincts. On Wednesday, he found the twine first in the second minute, establishing a lead that Podhale would not relinquish for the remainder of the match.

Cracovia will have some soul searching to do tonight, combating evident frustration and apparent fatigue. They will also need to look for a new scoring recipe, as their strategy of cycling the puck in the corners and behind the red line, which they have pursued in success and failure for years, has been uncovered by the shrewd Nowy Targ team, and those plays are not available at present.

Cracovia has found itself up against the wall, as Podhale needs only one more victory to claim the title of Polish Champions. They’ll have their chance tonight at 8:15 pm, televised live on TVP Sport.