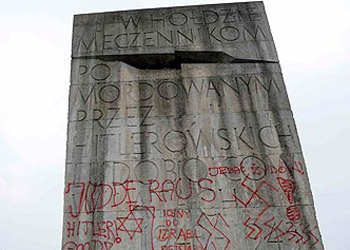 On Saturday, spray-painted anti-Semitic slogans were found on memorials of the former Nazi concentration camp at Płaszów. A large monument was daubed with red-colored graffiti saying “Juden raus” (in English, “Jews out”), as well as “Hitler good”, whereas a smaller granite plaque was defaced with a swastika.

The vandalism was discovered one day before a memorial march commemorating the 67th anniversary of the liquidation of Krakow’s ghetto. On 13 March 1943, German soldiers carried out the final deportation of an estimated 16,000 Jewish residents. Those classified as being able to work were sent to Płaszów, while the rest (approximately half of the deported Jews) were immediately killed or sent to Auschwitz-Birkenau.

Just right in time for the memorial march, Krakow’s municipal anti-graffiti squad removed the heinous and disrespectful tags. According to police official Anna Zbroja, the authorities have started an investigation and are currently trying to find out when exactly the act of vandalism occurred.

For the Israeli ambassador to Poland, Zvi Rav-Ner, who attended the commemoration ceremony, the desecration of the Holocaust monuments depicts a disgrace, not only for the Jewish victims, but also for those Poles who risked their lives to protect and rescue their fellow citizens.

The incident also reflects the unpleasant tendency of a smouldering anti-Semitism in Poland, a traditionally awkward issue for the country to address, as the history of post-war Jewish-Polish relations has to be seen as much more complex and ambivalent than Polish discourse will usually admit.