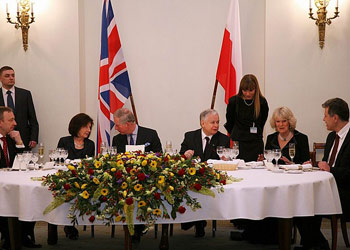 His Royal Highness the Prince of Wales is on his way to visit the Białowieski National Park in the eastern Podlasie region of Poland this afternoon. The area is home to the last remaining few thousand specimens of the żubr, the European bison.

On the other hand, his wife Camilla, Duchess of Cornwall, will not be able to accompany him due to a backache, and will instead visit the recently opened Chopin museum in Warsaw.

Of course, meeting the żubr was not the sole purpose of the overall three-day trip to Poland by the royal couple. Upon their arrival on Monday, Charles and Camilla took part in a wreath laying ceremony in honor of Polish priest Jerzy Popiełuszko, murdered by the Polish secret service in 1984. As a hero opposing the communist regime, Jerzy Popiełuszko is expected to be beatified by the Catholic Church this June.

Following that, the British couple met with President Lech Kacziński and First Lady Maria Kaczyńska to briefly discuss issues such as environmental protection, Polish emigration to the UK, the future of the EU, as well as the Chopin anniversary. They also conferred with Prime Minister Donald Tusk and participated in a feast with Polish representatives.

Besides a meeting with Minister of Culture Bogdan Zdrojewski and a company of Polish soldiers preparing for deployment in Afghanistan, Prince Charles and his wife will meet with the Tatar community and visit one of the oldest mosques in Poland in Kruszyniany before leaving the country.

The trip to Poland is part of an overall nine-day visit to Central and Eastern Europe. Their further itinerary foresees stops in the Czech Republic and Hungary.