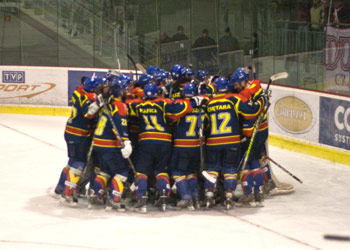 For the weekend’s highly-anticipated match-ups, Cracovia Comarch arranged a host of surprises for the fans – the brought in special skylights, lit their stadium like a Las Vegas casino, invited special musical guests WHE and Maciek Maleńczuk, and installed pyrotechnical equipment to celebrate goals. Still, the fans got one thing they really didn’t expect – two losses.

After breezing through the quarter- and semi-finals, Cracovia Comarch lost the first two games of the Polish Hockey League final series on Friday and Saturday to Wojas Podhale Nowy Targ in a historic first-ever championship matchup between the two. Both matches were decided by a single goal. The wins give Podhale a chance to decide the series by winning the next two games before their own supporters in Nowy Targ this week.

Game one started with conservative and sometimes sloppy play from Krakow’s home side, then after a quick exchange of goals disappointment turned to horror as Cracovia keeper Rafał Radziszewski mishandled an easy puck dumped into his zone by Damian Kapica, deflecting it off his stick into his skate and gently kicking it back into his own net. A defending error only one minute later at the blue line presented Podhale’s Milan Baranyk with a one-on-one with Radziszewski, and put the Krakow club down 1:3.

A five-on-three power-play goal gave Cracovia hope in the third period, and Radziszewski collected his nerves to save a penalty shot from Kolusz, but their failure to capitalize on opportunities ultimately cost them the match. The final score was 3:4.

Game two saw a new approach from Cracovia, led by 34-year-old captain Daniel Laszkiewicz, who set the example with aggressive physical play on the forecheck and taking penalty minutes for some post-whistle roughhousing in the first and second periods. Both teams answered the call by raising the level of aggression at both ends of the ice. Crcaovia thrilled the full house of fans with a stunning shorthanded goal from Piotrowski, who deked Podhale goalkeeper Krzysztof Zborowski out of his jock in a one-on-one chance, then flashed around the back of the net to stuff the puck in on the far side.

Cracovia was nevertheless to relinquish their two-goal lead in the 31st minute, then tie it up again, and through the third period momentum visibly shifted to Podhale as Crcaovia’s players succumbed to the youth, energy, size, and bruising physical style of play from Podhale’s defenders, as one player after another skated off the ice clutching bruised limbs. A questionable final-minutes elbowing call against Filip Dziewiecki left Cracovia undermanned for their final push to force the extra period, and the affair ended with 4:5 on the scoreboard for Podhale.

Whether Cracovia can recover from the defeats at home and win at least one in Podhale to bring the series home will depend on whether they can find the resources to overcome Podhale’s heavy-hitting defensive line, including Sebsastian Łabuz and Daniel Galant, and whether they can handle the home-ice edge that Podhale can expect from its dedicated and passionate fans.

Games three and four are to be played Wednesday and Thursday at 8:15 pm in Nowy Targ. They will be televised live on TVP Sport.