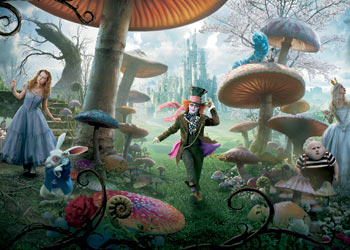 Why is a raven like a writing desk? If ever a director was destined to answer that question, then Tim Burton’s the man. Burton and Carroll seem like a match made in heaven (or should that be hell, given Mr. B’s gleeful penchant for the macabre?).

The hype for Alice in Wonderland has been predictably gargantuan, and as always, the director has corralled a 24 carat cast for the job. The promise of Johnny Depp as the Mad Hatter was itself cause for excitement. So has Burton pulled it off?

Some months ago, when quizzed at the Empire Awards about how Alice was going, the director gave a lively reply: “What do you want me to say? I’m freaked out. I have no idea. I’ve fallen down the rabbit hole… I have no idea what the fuck’s going on!”

It would be a huge relief to declare that Alice is in fact a dazzling work of dotty genius, but it seems there was something rather prescient in Burton’s remarks. Sadly, this is not one of his greatest films.

It’s fair enough that Burton might want to rewrite Carroll to suit his own needs. But one can’t help feeling that someone slipped a potion into his soup, shrinking his immunity to sentimental cliches and trite moralising. This is a Disney film, and somehow, the insidious wand of Uncle Walt has permeated Burton’s Wonderland. Even the castles look like a cheesy echo of the Disney model.

From the outset, surely the whole point about entering Wonderland is that you have a chance to luxuriate in its bizarre beauty. But barely has Alice set foot in the realm and she’s locked in a chase between goodies and baddies. There’s scant room for dreamy digressions. Then there’s the matter of the animation itself.

Burton has already made fantastic forays into the world of stop-motion animation (The Nightmare Before Christmas, Corpse Bride). As a bold experimentalist, it was only a matter of time before he tried his hand at the much vaunted 3D formula. Yet it doesn’t quite work.

In Charlie and the Chocolate Factory, gallant confectioners were hired to create lawns of edible grass, and the chocolate river really was cocoa-fuelled. It looked wondrous, and palpably so. Here, in spite of the extraordinary skills of the animators, it all looks too perfectly fake to exude much of a magical aura. Danny Elfman’s music doesn’t help much either.

To be fair, there are some magnificent moments. The Mad Hatter’s tea party is tremendous. Yet it’s one of the few scenes that really does justice to the anarchic spirit of Carroll. Meanwhile, Helena Bonham Carter is superb as the Red Queen. Hats off, or rather heads off, to her.

It seems mean to bash the director for giving 3D a whirl. As Alice would say, it’s frightfully rude to make personal remarks. Some of Burton’s palace interiors are stunning, with their soaring stained glass windows and trembling frog pages. It’s a much better film than the comically cringe-worthy Avatar. But it’s not just the cartoons that are problematic here. And given that Burton is one of the great, distinctive cinematic visionaries of our day, Alice can’t help but seem like a bit of a missed opportunity. Would a faithful, live-action version have produced a true Burton masterpiece? Why is a raven like a writing desk…?