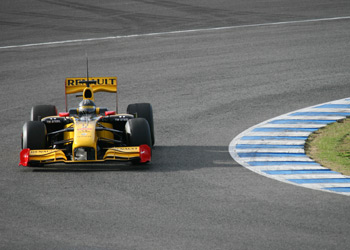 A cloud of smoke from the rear end of Mark Webber’s Red Bull car blinded Robert Kubica and Adrian Sutli in the first turn of the Bahrain Grand Prix Sunday, causing them to come together and spin, falling to the back of the pack and ending their hopes of finishing with points in the first event of the new F1 season.

The contact incident damaged Kubica’s tyres, forcing him to head to the pits early and run the remainder of the race on hard tyres. He was nevertheless able to fight his way back to eleventh, where he remained mired for the rest of the race.

Kubica went into the event with the acknowledgement that technical problems with the R30 single-seater were likely to prevent Team Renault, with whom he signed in October, from finishing with a podium. Earlier in the week he told reporters: “We lack grip and the car under-steers, especially in fast corners.”

The aim now will be to take the lessons learned in Bahrain and outpace the other teams in ironing out technical kinks and learn how to best compete under this season’s significantly changed rule book.

The most drastic change will be the prohibition on refuelling. This both speeds up pit stops and changes the cars’ behaviour, with cars starting loaded with heavy increased fuel loads and growing lighter as they burn fuel as the race progresses; the cars will have to start with nearly three times as much fuel as in recent seasons. The resulting higher starting weights (the limit on car weight is now 620kg, up from 605) also take a heavier toll on brakes and tyres, changing the way drivers approach corners in the early running.

Drivers have begun grumbling about the refuelling rule and its impact on the flow of racing, and conservative driving was a noticeable factor Sunday. Returning F1 superstar and seven-time champion Michael Schumacher said, “overtaking was nearly impossible unless somebody makes a mistake,” and Sunday’s winner Alonso argued, “after the first lap the positions will be set”.

Another new rule modification is designed to encourage teams to race to win by dramatically increasing the premium for finishing first. This year, first-place finishers will receive 25 points, second place 18, with 15 for third, tapering downward to 1 point for tenth. Previously, the winner received 10, second 8, and so on down to one point for eighth place.

Despite finishing out of the points on Sunday, Kubica and his new Renault teammates should see the performance as promising, having run with good pace and nearly fighting their way to a finish in the points. He told reporters on Sunday, “I think we would have easily finished in the points – and quite good points,” adding, “We did almost a complete race with one set [of tyres], which was a nice challenge”.

“We didn’t have any problems with the engine temperature or the brakes, which was very important in Bahrain. It’s positive for the future. We have seen that we can run easily on maximum power for the whole race – just in the last 10 laps I had to save fuel because I burned a lot when catching the others.”

The race was won by Kubica’s Renault predecessor, Ferrari driver Fernando Alonso. Ferrari’s Felipe Massa finished second to give the team a massive 43 points in the constructor standings to McLaren-Mercedes’ 21.