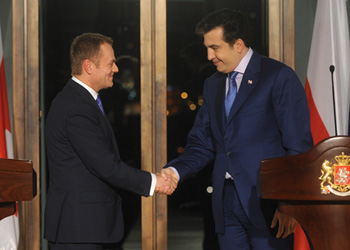 Today, the Polish head of government is to finish his four-day visit to the region of the Southern Caucasus. After stops in Azerbaijan and Georgia, PM Donald Tusk arrived this morning in Yerevan, Armenia. There, he is expected to meet with President Serzh Sargsyan and Prime Minister Tigran Sargsyan, as well as with the head of the Armenian Church.

The leaders will concentrate on interstate tensions with Azerbaijan concerning Nagorno-Karabakh, an autonomously administered region, which lacks international recognition as an independent state.

In addition to political topics, Tusk will above all lay stress on economic cooperation and development, which reflects his preceding visits to Georgia and Azerbaijan. In the latter, where he had started his trip, the prime minister met with head of state Artur Rasizade and President Ilham Aliyev in order to discuss the Odessa-Brody pipeline project as a new means of energy supply for Poland.

In Tbilisi, during talks with Georgian representatives, Donald Tusk positively remarked on the country’s economic progress and its increasing success in fighting corruption. Tusk also announced plans of setting up a direct flight connection between Georgia and Poland.

Overall the prime minister’s trip to the Caucasus has to be seen within the framework of the European Union. As a vital part of the so-called Eastern Partnership, the EU aims to enhance its economic and political relations with Armenia, Azerbaijan, Belarus, Georgia, Moldova and Ukraine.

As Poland will assume the Presidency of the European Council during the second term of 2011, the Polish government is to perform a special role in preparing a concept that will foster a harmonisation between the EU and its eastern neighbours.