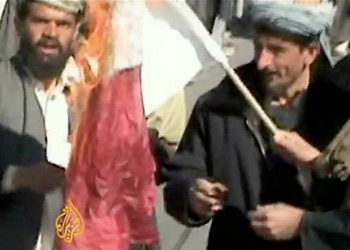 After an American-led attack in the Ghanzi province of Afghanistan, Afghans accused Poles of killing civilians and set fire to a Polish flag, convinced that the operation was headed by Poles. According to a local television station, the villagers blocked the main road from Kabul to Kandahar and set fire to the white and red flag.

The operation in question took place at the end of January in the village of Kalech Jebara. The American special forces were tasked with finding and killing dangerous Taliban militants who were on President Hamid Karzai’s list of state enemies.

According to the Afghan villagers, four civilians were killed in the operation, including two children. The local television station then showed a demonstration that took place on the road between Kabul to Kandahar two days after the attack, with over one hundred participants. It was then that the Polish flag was burned.

According to a report in today’s Gazeta Wyborcza newspaper, this was a joint operation between American and Afghan forces. The newspaper did discover that members of the Polish contingent did intervene, though to what extent it is not clear. Polish forces are responsible for the security of Ghanzi province, and at the moment there are over 2,000 Polish troops in the area. According to Gazeta, the Polish army leadership is afraid of ruining the good relations it has with the elders in the district of Karabagh, as well as attacks on Poles.

“We were not the ones who killed these civilians, but they accused us, because Afghans associate Ghazni and Karabagh only with Polish soldiers. For them there is no difference between American and Polish his uniform, especially at night,” an informant told Gazeta.

According to the informant, the American forces have since paid compensation for the four dead civilians after meeting with the village elders. The Polish military released a statement saying that Polish forces were only securing the perimeter during the operation.

One thought on “Poles Accused of Civilian Deaths in Afghanistan”