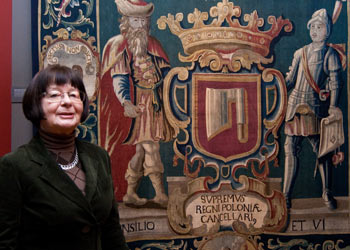 For much of the 17th and 18th centuries, the Polish Lithuanian Commonwealth was the largest European state. It may have been on a course for disaster – “a beautifully phosphorescent rot-heap,” as it was described – but there were still moments of glory as late as 1683, when King Jan Sobieski helped save Vienna – and Christendom – from the Turks.

The Polish nobility cultivated the notion that they were descended from an ancient warrior tribe, the Sarmatians, hence the love of oriental splendour and finery. The Sarmatian era was one of the most colourful in Polish history, even though excess, coupled with political inertia, eventually proved the undoing of the state. “Za Króla Sasa, jedz, pij i popusczaj pasa!” (“Under the Saxon King, eat drink and loosen your belt!”) runs the well-known adage.

The Sarmatian image was challenged by progressive Poles during the Enlightenment, yet Poland was ultimately dismembered at the close of the 18th century. Reform had come too late. However, aspects of the culture survived. Noblemen continued to wear their oriental dress at weddings and public occasions right up until World War II.

A new exhibition organised by the National Museum and Teatr Stary explores the exotic image the Poles created for themselves. There are exquisite relics from the applied arts, including jewellery, costume and glassware (the Poles actually invented a special type of wine glass that had no base, so that guests were obliged to down the lot in one go as each toast was made). Visitors can also savour a collection of classic Sarmatian portraits. Earlier this month, the Krakow Post chatted to curator Dr. Beata Biedrońska-Słotowa about the Sarmatian phenomenon. 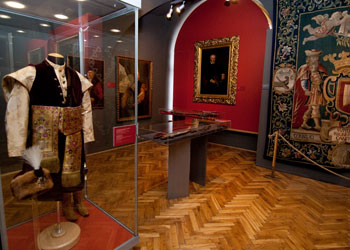 Krakow Post: One historian noted that the lifestyle of a Polish magnate during the Sarmatian era was more comparable to that of an Indian Maharajah than that of a French count or an English lord. Do you think that this is a fair assessment?

Beata Biedrońska-Słotowa: That’s an interesting comparison, but it seems exaggerated. The style of life of the owners of the great estates of the Republic was insanely rich and sumptuous. It had its own ceremony, often created individually for the use of the owner of a given estate. It depended to a considerable degree on the owner, and his personality. Was it more like in India, or was it rather more comparable to France? Certainly, it was not similar to the style of life in English residences, where restraint dominated, and the flaunting of riches was not fashionable. However, the style of life on Polish estates was not as refined as it was in either India or France.

KP: A lot has been written about the negative aspects of Sarmatism, especially pertaining to the Saxon era (1697-1763) – the heavy drinking, the clinging to the Liberum Veto*, the xenophobia. Do you feel that it is time for some emphasis to be given to the positive aspects?

BB-S: One searches in vain for positive aspects of the Saxon times. It was a hideous time for us. The kings mainly resided in Dresden, and solely looked after their own interests. The nobility quarrelled and became generally demoralised. The law of the Liberum Veto was the proof of the citizens’ liberty, but generally speaking there was a complete lack of understanding for the needs of the fatherland. The nobility was solely concerned with its own comfort. It all resulted in a vast regression and catastrophe.

KP: In terms of art, what do you think are the most remarkable examples of the Sarmatian era?

BB-S: In this realm, one could count artistic handicrafts, which were examples that attained true artistic refinement. Glass, sash belts, articles fashioned from metal and embroidery made in Polish manufactories also stand up as good examples. The individual expression attained in portraiture is also notable, although it does not represent anything special on the artistic level. Funerary banners also count amongst the more interesting works, as regards to artistic conception. 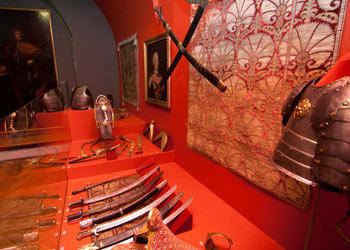 KP: In what ways do you think that the Sarmatian spirit, and Sarmatian tastes, are echoed in today’s Poland?

BB-S: The Sarmatian spirit is deeply ingrained, and a great deal was preserved that one could ascribe as its heritage. Amongst other qualities, there is intolerance, which is often still encountered, creating the often observed fear in certain circles of opening up to the West, or the proverbial “sobiepaństwo” (a lord unto one’s self), in other words the looking after one’s own interests, which is unfortunately accompanied by the false pretences of looking after the good of the whole society.

KP: Minister Sikorski suggested last year that the kontusz [Sarmatian dress] should be reinstated as national dress for Polish diplomats at galas and festive occasions. Do you think that this is commendable idea?

BB-S: This is a commendable idea – all the members of parliament could attire themselves in this fashion, and line up on display in Krakow, so we could see how it works. Speaking seriously though, for special occasions, yes. Well-sown garments and well-composed colours could create a sensation. But after all, if you wear such garb then noblesse oblige….

Sarmatism: A Dream of Power (Sarmatyzm: Sen o Potędze) runs until 30th May at the Stanisław Wyspiański Museum in the Szołayski House, ul. Szczepańska 11.