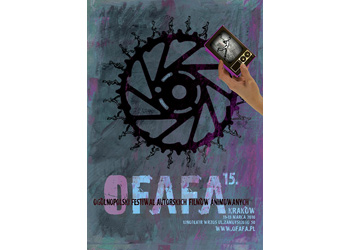 The Polish Festival of Auteurs in Animation (Ogolnopolski Festiwal Autorskich Filmów Animowanych, or OFAFA) is celebrating its 15th anniversary in Podgórze. This year OFAFA kicks off on Thursday, 11 March at Kino Wrzos (ul. Zamojskiego 50). The event is the only national festival in Poland devoted solely to Polish animated films.

“The number of professional directors and amateur video makers interested in participation went beyond our expectations. We received more than 96 submissions this year,” said festival director Janusz Korosadowicz. Curators have selected 67 pictures as part of the official competition.

Taking into account the record-breaking number of submissions, the OFAFA organisers decided to also present the non-professional features rejected from the competition in a new section called “Salon odrzuconych” (Polish for “The Reject Exhibition”). Only 18 amateur works have been selected to compete for the Grand Prize. Out of competition films will be screened at Film Club Lokator (ul. Krakowska 27).

Film Club Lokator will also host an exhibition of film posters, devoted to the works of the renowned graphic designer and cartoonist Jan Lenica (1928-2001). At the same spot, OFAFA will celebrate the 10th birthday of MTV Polska with a special screening, including some of the best animated promos and short features created for the Polish version of MTV.

In the major section, 26 professional animators compete for the gold, silver and bronze “Kreski” (literally meaning “lines”, used also as a synonym for “cartoon” in Polish). The second part of OFAFA is devoted to 23 features directed by students of Polish film schools, including a couple of works produced at the Krakow Academy of Fine Arts.

OFAFA’s organizers decided to also include several animated movies targeted at children in the main section. “Usually we didn’t put aside cartoons for the smallest of audience members,” said Korosadowicz, adding that “the cartoons for kids in the competition have the same chances as the others of winning the Golden Kreska”.

The 15th OFAFA will pay tribute to several of its jury members, unveiling to the public some of the most significant animated features created by Kucia, Turło, and Rynkiewicz. This year, the festival will also present some of the best Czech and Russian animated films produced in the last two decades.