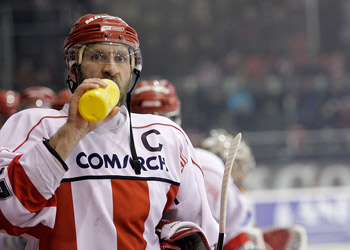 The teams for the final series of the playoffs for the Polish Hockey League championship are set, following a dramatic seven game long series between GKS Tychy and Wojas Podhale. Pohdhale prevailed in a six-nil victory on Sunday night, setting the stage for a final series with the Polish champions and bitter Małopolska rivals Cracovia Comarch.

The two teams share the most deeply rancorous rivalry in the Polish hockey league, and while they have met in playoff competition before, they have never played one another directly for the Polish title. Podhale has won more championships than any other team since its founding in 1956, including nine consecutive titles in the 1970s and five in a row in the mid-1990s. Over the past four years they have been eliminated three times in the semi-finals, in 2006, 2008, and 2009; in each of those years Cracovia won the championship. In the intervening year, 2007, Podhale defeated Cracovia in the semi-finals and went on to win the final series against GKS Tychy.

The duel comes at a time when Cracovia is seriously considering leaving the Polish league in search of a higher level of competition in the Austrian league, and in a season when Podhale lost the sponsor which provided 75 percent of their budget.
Wojas Podhale was sponsored by Wojas SA, a shoe manufacturer. After withdrawing financial support, the team’s name was not changed because the head of the shoe company, Wiesław Wojas, still owns 90 percent of the team. This may be the club’s only opportunity to vie for supremacy in the Polish league, and both teams will be aiming to make it a victory to remember.

As the closest neighbours in a league whose clubs are heavily concentrated in the southwest of Poland, Cracovia’s and Podhale’s fans enjoy a virulent mutual animosity, and crowd clashes more typical of football are not unknown occurrences between the teams’ supporters. The popularity of hockey in Podhale means that many prominent people from the neighbouring mountain region remain ardent supporters, including the Metropolitan of Krakow, Stanisław Dziwisz. Podhale’s players visited Dziwisz to receive blessings after winning the title in 2007, a move reminiscent of Cracovia’s many visits to the late Pope John Paul II in Rome.

Game one of the best-of-seven series will begin on Friday at 6 pm at ul. Siedleckiego 7.