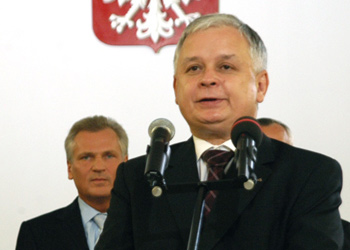 President Lech Kaczyński’s political party, Law and Justice (PiS), has announced that it wants the president to seek a second term in the 2010 elections. The announcement was made at a party convention on Sunday.

However, the president has not yet publicly stated whether he will run or not. If he does decide to run, he is facing an uphill battle, between low popularity ratings and potentially strong candidates from other parties.

Meanwhile, the candidate from rival party Civic Platform (PO) has not yet been announced, though party leader and current prime minister, Donald Tusk, stated that the candidate will be decided before Easter. The leading contenders are Foreign Minister Radosław Sikorski and Bronisław Komorowski.