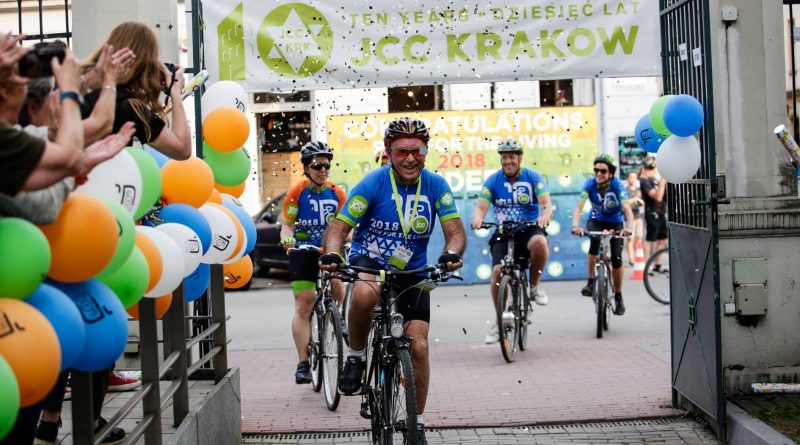 When three-time Tour de France winner Greg LeMond stepped off his bike in Krakow on June 29, he knew the ride he had just undertaken was different from all those that had come before. LeMond – along with two Auschwitz survivors, members of Krakow’s local Jewish community, and participants from around the world – had just completed the 60-mile bike ride from Auschwitz-Birkenau to the Jewish Community Centre of Krakow (JCC Krakow) as part of the Centre’s fifth annual Ride For The Living.

“It was an amazing event riding with two survivors 73 years after the Holocaust,” LeMond said. “Being with [Auschwitz survivor] Marcel Zielinski at Auschwitz-Birkenau was so powerful, and I will never forget it. It is something that everyone should experience.”

Eighty-three year old Zielinski, a native Cracovian, survived Auschwitz and participated in Ride For The Living for the fourth time this year as the ceremonial grand marshal. When Auschwitz was liberated in 1945, Zielinski walked from the camp back to Krakow, where he reunited with his mother before moving to Israel and then Canada. Along the way, he became an avid cyclist.

“The journey that we take, the same route Marcel once walked, represents the transition from darkness to light, from the despair of Auschwitz-Birkenau to the hope of JCC Krakow, and from the past to future,” Ride For The Living Coordinator Agnieszka Giś said. “We ride to remember the past and to celebrate and support the revival of Jewish life today.”

Ride For The Living is not only a bike ride, but in fact a four-day event focusing on education about Poland’s Jewish past and present, as well as raising funds for JCC Krakow. Over 200 participants from the eleven countries represented this year toured Auschwitz-Birkenau the day before the Ride and chose from tours of Jewish Krakow, the Krakow Ghetto, and Old Town, among others, on the day afterward.

“Five years ago we set up Ride for the Living with an emphasis on education, but with a positive symbol of cycling away from Auschwitz to the incredibly strong and welcoming Jewish Community Centre of Krakow that is not so far away,” JCC Krakow member Robert Desmond said. “The greatest stand we can have against the Nazis by living life to the full.”

Desmond, a Katowice resident and native Englishman, inspired Ride For The Living when he rode his bicycle 1,350 miles from London to Auschwitz, visiting WWII sites of liberation along his journey. After joining the JCC and learning about Krakow’s reborn Jewish community, he realized his ride should not have ended in a place of loss but rather at a place of hope.

That message seemed to resonate with those who rode alongside Desmond in the 2018 edition of RFTL, the largest one yet. “Riding into the JCC along with 15 members from my home community and 200 others from around the world was an experience that truly moved me,” said Samantha Notowich of the United States, who encouraged friends and family from her hometown to join her in Krakow for RFTL 2018 after she participated last year. “The whole day was not easy, but the Ride experience reminds us to remember our past but also to celebrate our future.”

For Giś, reactions like Notowich’s mean the Ride has achieved its goal. “The power of the ride is that all generations come together, united to commemorate the Holocaust, but also to stand up for and with the Jewish community,” Giś said.

One of the ways in which this year’s RFTL participants stood with Krakow’s Jewish community was by joining a 600-person Shabbat dinner organized by JCC Krakow as part of Krakow’s Jewish Culture Festival, at which the JCC honored Zielinski.

“The revival of Jewish life in Krakow should not be underestimated,” JCC Krakow Executive Director Jonathan Ornstein said. “I’m in awe every day of what our members, our staff and our volunteers have built at the JCC. The overwhelming support of our Ride For The Living participants is vital, and it is meaningful.”

The sixth edition of Ride For The Living will take place in late June 2019.