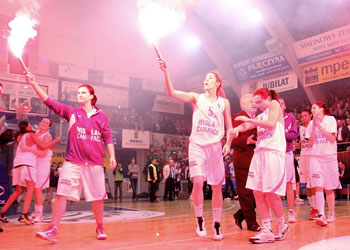 Wisła Can-Pack continues to march on its campaign for the Euroleague women’s basketball title. With their win in game three of the best-of-three series against Frisco Brno on Wednesday, they have now furthered their club-record achievement in the top European women’s tournament by qualifying for the semi-finals. In addition, they will be playing this weekend in the Polish cup against LOTOS Gdynia. The women’s recent successes put increasing pressure on the club to build a larger venue.

Wednesday’s tight match followed a loss in Brno, and the first half gave no indication of how things might turn out for the White Star ladies. WIsła led by two points at the end of the first, and were unable to extend the lead in the second; as they could not effectively penetrate into the lane, they were forced to make use of their precision three-point shooting ability to hang on to those two points.

Only in the third did Wisła manage to push farther ahead, outscoring Brno by another four points. That lead was again to vanish as the Czech squad rallied with five minutes remaining to tie the game at 65. The rapturous crowd exploded when, with 18 seconds remaining, the deadlock was broken by a desperate three point attempt by Jelena Skerovic, putting Wisła ahead 76:73.

The crowd presence in Wisła’s tiny hall of only about 2,500 attendees was credited by both Wisła players and the Czech press as a deciding factor in the series. The Brno papers have referred to the venue as “Cracovian Hell”, and the past two rounds of Euroleague play have been standing room only affairs. Wisła’s Israeli guard Loiron Cohen told the crowd in English, pointing through the smoke of flares at the massed red and blue supporters, “This is the last Euroleague game here in Krakow, and we haven’t lost even once and it’s because all of you!”

The only complaint from the Wisla bench concerned the size of the arena, as coach Jose Fernandez called it “insane” that a city such as Krakow does not have a bigger, more modern facility.

The remainder of the Euroleague matches will be played away at a venue to be announced. This will be Wisła’s first trip to the final four, where they will face Spanish basketball Goliath Ros Casares. The other two teams include the two Russian superclubs, UMMC Ekaterinburg and three-time champions Spartak Moscow Region. Wisła is the only club remaining that has not been to this level before

American centre and three-point threat Janell Burse stood out once again on offense with 20 points, followed closely by guard Marta Fernandez with 17.

Also this week, Wisła Can-Pack’s Serbian Maja Vucurović was crowned “Miss Polish League”, having been voted the most beautiful player in Poland.