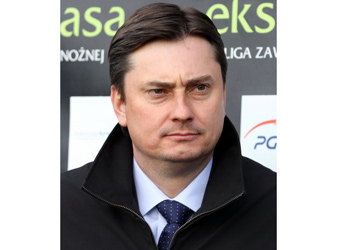 Wisła Krakow will face Arka Gdynia at their temporary home in Nowa Huta tonight, where the stakes are reportedly high for the champions’ manager Maciej Skorża. The first-place Krakow club lost their first outing since the winter break against GKS Bełchatów on Saturday, but without key players. While Wisła has held their ground as league leaders in recent months, Skorża enjoys dwindling support from fans, and more importantly for his job security, from club owner Bogusław Cupiał.

Reports indicate that Cupiał is losing patience with Skorża. While Wisła is the reigning champion and the present leader, it has nevertheless been an unsatisfying season for the club’s supporters. While Wisła has consistently beaten the teams at the bottom half of the table, their offense has let them down in the matches that matter most to the fans; in the fall round they lost to Legia Warszawa, Lech Poznań, and worst of all, to Cracovia Krakow. A draw tonight will cost Wisła its position as table leader.

Skorża will be hoping that the return of Paweł Brożek and Patryk Małecki tonight will give his job at Wisła a new lease on life. He will also be counting on his new Bulgarian striker, Georgi Hristov, to resolve the team’s offensive difficulties. Hristov did not make the impact Skorża had hoped for in the match against Bełchatów, but he had only trained with Wisła once at the time. The loan deal for Hristov with Levski Sofia, which is to cost the club two hundred thousand euro, may turn out to be the deciding factor in Skorża’s future with the club.

Wisła returns to Krakow after more than six months of playing elsewhere while their stadium on ul. Reymonta undergoes renovations, to play on the same pitch where Cracovia lost 1:2 against Legia Warszawa last weekend. The stadium, Suche Stawy, has become the epicentre of the city’s fierce football rivalries, with additional emotions coming into play as a vocal minority of local supporters of the now-defunct Hutnik club have taken exception to the use of the pitch.

The match begins at 19:55 and will be broadcast on Canal+ Sport and Orange Sport.