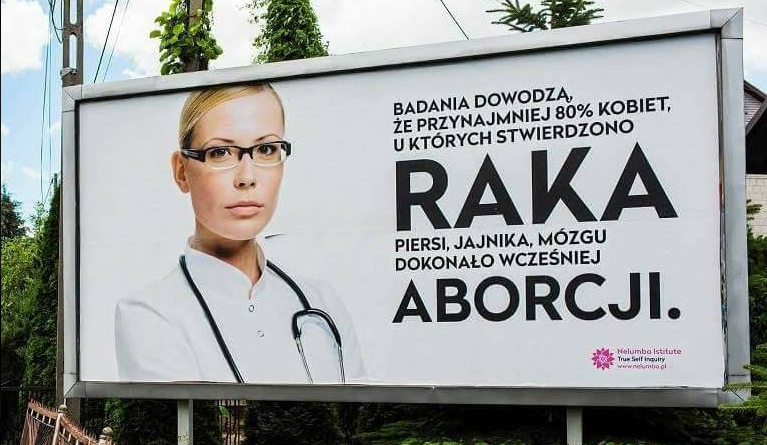 Nowadays billboards are a preeminent feature of the landscape in Poland. Every year the streets in Warsaw are fringed by over 20,000 roadside advertisements, 10 times more than in Paris.

Some nostalgic citizens may even regret the arguably less obtrusive (and at times even visually inventive) neon signs that used to make their point only in the dark during the communist era. Billboards can conceal the landscape from a car window and divert drivers’ attention away from the road, but also appeal to the passengers of a vehicle, especially when younger children are in the rear seats.

Over the past years a number of controversial billboards have fanned the flames of the never-ending controversy between pro-life and pro-choice sides. Abortion provisions in Poland are among the most restrictive in the world. Currently termination of a human pregnancy remains illegal on the Polish territory except in the following three circumstances: a severe damage to the fetus, a serious threat to the mother’s health, or when pregnancy is the result of violence against a woman. The ruling PiS party’s attempts to further limit this in recent years have led to the massive CzarnyProtests in response.

In some cases the billboard messages related to the abortion debate do not include any shocking images but still can be disruptive in terms of written content. In July 2017 a billboard got some buzz in the surroundings of Przeginia, a village near Krakow. Translated from Polish, the message. featuring a female figure dressed in a medical gown, said that “80% of the women who were diagnosed with breast, ovaries, or brain cancer had an abortion before”.

Subsequently labelled as misinformation by the local medical community, it was revealed that this statement was not commissioned by an anti-abortion group. In fact, the road sign was designed by the Nelumbo Institute, a life coaching organisation not related with any Catholic think-thank. “We used the image of a doctor just to prove how much people would go far in trusting individuals just because they are dressed in scrubs”, explained the group.

Where the campaign orchestrated by the Nelumbo Institute is mostly a joke in poor taste or, at best, an experiment in social engineering, they were relatively inoffensive visually compared to messages delivered by the big pro-life players in Poland – which often contain pictures of terminated foetuses covered with blood.

“Small children can’t avoid looking at the billboards, said Krakow city councilman Łukasz Gibala. “Krakow should not consent such images to be displayed. There are other ways of expressing opinions. We are looking forward to adopting with a local resolution the landscape bill”, he adds.

The so-called landscape bill (“ustawa krajobrazowa” in Polish), signed by former President of Poland Bronisław Komorowski in April 2015, filled a legal vacuum by granting a certain margin of manoeuvre to local authorities with regard to the road signs displayable on the roads. Łódź was the first major city in Poland to approve such a resolution. Meanwhile Gibala has submitted an interpellation on the matter to the City Council in Krakow.

For many outdoor advertising companies the enforcement of the bill could be mean bankruptcy. Although there have been campaigns against unsightly advertising in the past with some success, at present there are no restrictions with regard to the content of street-level displays, provided that the billboards are located in a private property. On the other hand, the market-driven Committee of Advertising Ethics is not entitled to process any complaints from consumers related to social advertising.

The left-wing Together (Razem) Party has tried to address the issue with an initiative that goes under the name of “Szantaż z dala od szpitala”. According to its authors it was established “in response to the growing presence of anti-choice messages in the public space.”

Razem spokesperson Monika Piasecka said, “Our campaign’s main aim is to address a very common feeling helplessness when facing these posters. We try to encourage people to react and take legal steps, by providing them with instructions concerning notifying the police, participating in the trial, and appealing if the case is discontinued.”

According to Razem, not too much can be done while waiting for the approval of the landscape bill: “At the moment – unlike France and Australia – Poland does not have a regulation that would explicitly ban such images – neither in the public space nor online. The only possible way to proceed is to refer to the regulations concerning causing outrage or violating public order and displaying obscene images. The more people take an effort to notify the police, the higher the probability of winning the case in the court”.

Any attempt to bring before the court anti-choice message with an explicit consent is certainly not ’tilting at windmills’. Nevertheless, Mariusz Dzierżawski of the foundation Pro-Right to Life (Pro-Prawo do życia) has obtained the dismissal of twenty or so court cases on the matter. “The strategy adopted by the abortionists relies on concealing the truth,” he argues. “We want to show that abortion means nothing else than murdering a person.”

The anti-abortionist side often cites several assessments performed by Polish psychologists undermining the impact of gruesome images on children’s mind. In a study commissioned 10 years ago, Beata Rusiecka stressed the fact that young humans between three and seven years of age would perceive reality in a sketched and vague manner: “Separated human bones could be recognised for instance as a toy whose pieces are broken.” Still, the research is far from conclusive, and many parents have objected to the graphic billboards, regardless of their opinion on abortion.