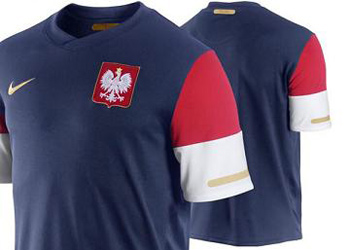 The gathered Poland supporters at Stadion Polonii were warmed by a solid performance on Wednesday night, as Franciszek Smuda’s refurbished squad convincingly bested Bulgaria 2:0 on goals from Kuba Błaszczykowski and Robert Lewandowski. The outing was the national team’s third under the Lech Poznań manager’s tutelage, and their second win. The Bulgarian side featured Manchester United striker Dimitar Berbatov, and is ranked at No. 30 in FIFA’s ranking. The win came amid much disapproving discussion of the team’s new dark blue kits.

Smuda has had his work cut out for him rebuilding support amongst the Polish public after taking over for Dutchman Leo Beenhakker. The Polish FA has suffered a long run of public relations disasters, including arrests and indictments for corruption, the appointment of a wildly unpopular president, and, most of all, the failure to qualify for this summer’s World Cup. Smuda has a reputation for independence and hard-headedness, and has continued to emphasise that the roster is not set for Poland’s build-up to Euro 2012, stating flatly that no job is safe, and that there are no “sacred cows” on the squad.

Poland’s Borussia Dortmund forward Kuba Błaszczykowski showed his own determination to make the cut, opening the scoring in the dying minutes of the first half. Błaszczykowski had raised the expectations amongst Poles as far back as 2008, when he scored a goal and an assist against the Czech Republic in a World Cup elimination match, but failed to repeat the performance since. Błaszczykowski’s goal from just outside the goal area demonstrated the combination of patience and quickness that Wisła fans came to expect from him during their successful Polish League campaigns with him in 2004 and 2005.

Lewandowski also presented a strong case for his presence on the side, firing a driven shot into the top corner or Dimitar Ivankov’s goal in the 62nd minute.

Less easy for the Poles to quell were the persistent questions surrounding the dark blue Nike kits worn by the side, as even Telewizja Polska’s match commentators saying at kickoff time that they hoped “the match itself would look better than those shirts”. In a press conference following the victory, Smuda pointed out that red and white are worn by too many sides for Poland to always use wear the national colours. “When the team is winning, nobody will be saying that the kits are dirty or clean or short or long. Everyone will be happy to see wins and good play.”

Clearly exasperated Smuda responded to another kit-related question: “Lets not make a tragedy out of the shirts… Could we put an end to this subject? Because, instead of getting down to our work, we do nothing but argue about this and that and the other. I don’t care about that. The most important thing is that the national side plays well. We need a little more time, but we’ll do everything we can to make sure that happens.”