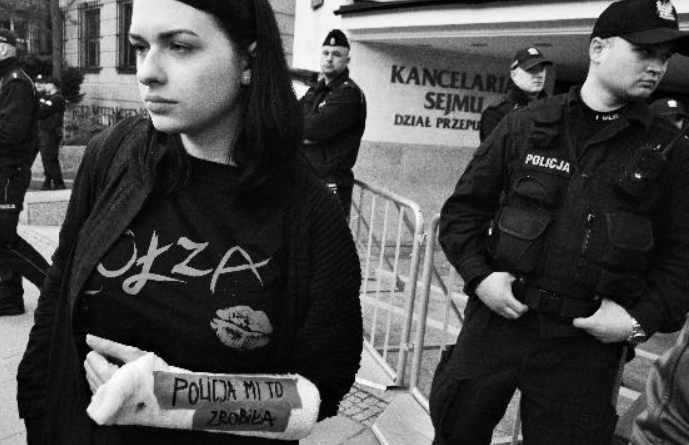 In a report released earlier this week, human rights NGO Amnesty International criticized recent developments in Polish law and policy, warning that they increasingly hinder the right to peaceful protest.

Specifically, the organization pointed to a “toxic mix” of policies in which nonviolent protesters and journalists are disempowered against police and then may be unable to get a fair trial afterward.

The report draws on information gathered by Amnesty International between October 2017 and May 2018, during which they interviewed over two dozen protesters and observed eight demonstrations. They detail instances such as protesters at women’s marches being assaulted by police officers, demonstrators being followed home or summoned by police as witnesses and then being treated as suspects, and gatherings being canceled by officials altogether.

The numbers alone tell a story: the court in central Warsaw received 632 cases in 2017 against protesters for violating assembly laws, compared to zero in 2016.

Amnesty International points to several causes of this, including a new law which gives preferential police treatment to “cyclical” protests (which, in turn, limits Poles’ ability to conduct spontaneous or counter protests) as well as a 2016 amendment to the Police Act which gives law enforcement broader powers to investigate and detain people.

Compounding these challenges, the report states, are “reforms” to the judicial system implemented by the far-right Law and Justice (PiS) party since they came into power in late 2015. An amendment signed last year by Polish President Andrzej Duda empowers the Minister of Justice to appoint and dismiss court presidents and vice presidents, and additional changes place the National Council of the Judiciary, the Constitutional Tribunal, and the Supreme Court under more politicized control. Furthermore, judges have complained that new policies on disciplinary proceedings against them make it easier for the government to punish them for politically undesirable rulings and allow unlawfully obtained evidence to be used against them – leading to fears of, for example, secret surveillance by police.

The implications of these developments for anti-government protesters is that, following mistreatment and suppression by police or the government, they may not be able to count on the courts to impartially protect their rights.

These changes have not only led to criticism by Amnesty International. The European Union has also accused the Polish government of eroding separation of powers and the rule of law, and may even consider sanctions against Poland in response.

Amnesty International is a global human rights nonprofit which counts over 7 million members. It was founded in 1961 and, in 1977, was awarded the Nobel Peace Price for “having contributed to securing the ground for freedom, for justice, and thereby also for peace in the world.” You can read their full report as a PDF here.