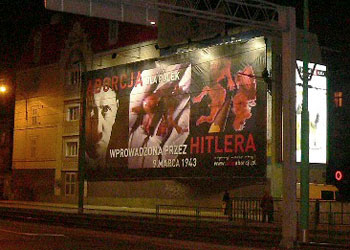 Poland already has some of the strictest abortion laws in the EU, but one anti-abortion group has launched a new campaign nonetheless. Fundacja Pro, a Polish pro-life organisation, is behind a provocative billboard campaign in Poznan that features an image of Hitler juxtaposed with a bloody foetus.

The billboard reads “Abortion for Poles: introduced by Hitler, March 9, 1943,” and its aim is to remind Polish women of this historical detail. However, the Nazi occupation is still very much a sensitive subject, and the use of Hitler’s image has infuriated many Poles.

“I understand that this campaign is designed to shock but there are limits to the use of shock,” Polish MP Elzbieta Streker-Dembinska told the Telegraph yesterday. She also said that the billboard’s imagery “crosses the boundaries of decency”.

The timing of the billboard campaign is meant to coincide with International Women’s Day, which takes place on 8 March.