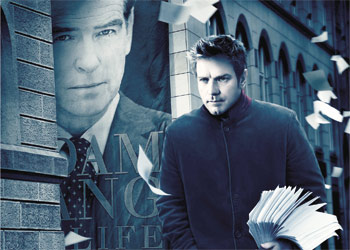 Roman Polanski’s latest film opens with a looming ship in a dark and turbulent sea: grand, bleak, mysterious, and potentially fatal. And throughout the two-hour stretch, it’s as if the film never leaves that opening scene; the waters never calm, the sun never appears, and the mystery only deepens.

From the start, Polanski pulls us into a world of isolation, both between people and in the long vast stretches of land and sea. Even meaning is isolated: the subtle looks and gestures between the dialogue often reveal more than the words themselves. Appropriately enough, the setting for most of the movie is an island.

The film centres around a former British prime minister (played by a surprisingly intense Pierce Brosnan) facing a trial over war crimes committed during the War on Terror, but it’s the two characters that surround him that become the most interesting – two ghosts floating in a world of larger than life figures. Ewan McGregor plays the title role, a classic outsider whose complete naivety makes him the perfect confidant. Hired to ghostwrite the prime minister’s memoirs after the sudden demise of the previous scribe, McGregor finds himself chasing the ghost of his predecessor, led by a completely wide-eyed curiosity. The prime minister’s wife, played phenomenally by Olivia Williams, is seemingly another ghost, though unlike McGregor’s character, she is unhappy with her situation, and is far too wilful to fade into the background.

In another director’s hands the film could easily have dragged, but Polanski uses the long drawn out scenes to relentlessly build tension. Sure, a few of the plot twists were a bit convenient (what kind of serious writer gets his information from Google anyway?), but the major bombshells were pleasantly unexpected.

And of course there’s the classic Polanski touch: those scenes of dark woods and creepy Victorian-style houses combined with ominous music that would more comfortably fit into a horror movie, rather than a political thriller. Any moments of humour are dark and most often reveal the futility of the situation. But perhaps the telltale sign of Polanski’s return to form is that when the main character feels fear, the audience feels a very real, foreboding fear.

The film is full of conspiracy theories, some more believable than others, but here is perhaps the most intriguing: as completion neared on a major motion picture that paints the United States and its close allies in a very sinister light, its director is suddenly arrested on 30-year-old charges by an ally of the U.S. Perhaps that could be the plot of a good film…

The Ghost Writer is playing at Kino Pod Baranami.