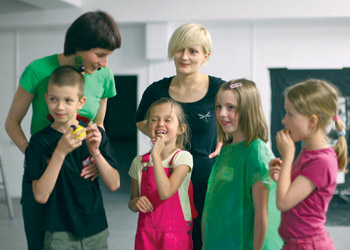 Anna Bargiel and Cecylia Malik are the creators and curators of the Little Club of Bunkier Sztuki (Mały Klub Bunkra Sztuki), a series of creative workshops for children concerning modern art, with the participation of professional artists. The Little Club has been operating since 2007 in the Bunkier Sztuki Modern Art Gallery.

Anna Bargiel: I really like living where I live now – by the Wisła, with a view on the gravel pits in Zabłocie. I regret that in Krakow you cannot live on a barge on the Wisła River, I think it would be fun. Of course, I could also live in a villa on the Lasota Square.

Cecylia Malik: I live in Salwator, which I believe is the best part of town, but it could even be much, much better for me if I ever had a chance to live on Aleja Waszyngtona, as close to Kopiec Kosciuszki as possible.

AB: Hmm, let’s let our imaginations run wild: to start, I would order a cleaning of the Wisła, so that people could swim in it again. But this winter, I would raise the salaries of employees of cultural institutions by 200 percent!

CM: I would save the green areas in Zakrzowek, Salwator and Błonia and ban our City Council from selling them to any developers, ever! I would also change the reservoir in Zakrzowek into an ecological aqua-park for everyone. And there would be no entrance fee.

CM: The inside of the Corpus Christi Church (Boze Ciało) in Kazimierz, as well as another dark and mysterious interior, that is, the flat of my friend Zdzisław Zabierzewski.

AB: Events like Wianki, or New Year’s Eve on the Main Market Square

CM: Wieliczka-Auschwitz tours and the Sukiennice.

AB: The Krakow mayor’s representative of culture, preferably made by Czesław Dźwigaj.

AB: I like dining in Momo on Dietla Street. Occasionally I pop in to Miejsce on Estery, to Goldex Poldex on Józefińska, and I fancy Bomba on Plac Szczepanski too.

CM: Always the places where I can possibly come across someone I know, such as: Miejsce (both in Kazimierz and Podgórze), Bomba, Dym, Piękny Pies and Café Bunkier at noon when I have an appointment with someone. I still prefer my neighbour Janek’s kitchen.

AB: A lack of transparent procedures in the cultural politics of Krakow; the fact that such places as the Teatr Nowy, which in 2009 was voted the “Best Place of the Year” by Gazeta Wyborcza, a year later, must suspend operations due to lack of grants from the Ministry of Culture.

AB: The countryside, or alternatively a busy city like London or Berlin.

CM: Łapsze, near the Pieniny Mountains. But when I am busy, it is always Las Wolski in Krakow.

AB: This year: yoga with my girlfriends twice a week at my place plus sauna.

AB: Definitely pancakes – the best are made by my partner.