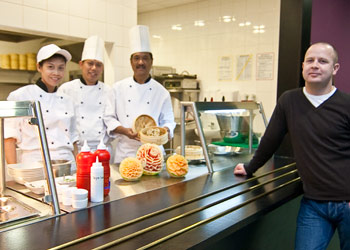 Fans of Asian food will tell you that in order to get a decent Thai meal in Poland, you have to go to Warsaw. Well, that was the case until last month, when Shanti opened its doors in Podgórze. We spoke with Shanti owner Shane Muldowney and Thai chef Pong Thep Aroonsang, who left Warsaw, where he had served as chef at the Marriott for 10 years, in order to bring genuine Asian cuisine to the people of Krakow.

Krakow Post: How did you end up in Poland, and how did you come to Shanti?

Pong Thep Aroonsang: First I got an offer from the Marriott to be a chef in Warsaw, and I stayed about 10 years, and then I found this man [points to Shane]. He invited me to his restaurant, and we came twice to see it and cooked for him, and I saw that everything here was excellent: nice kitchen, and good decor, different from other restaurants. And I saw that the owner had a very good plan for the future, [which was] to be one of the best restaurants in Krakow, or even in Poland. It was difficult to come here because of my family, but I saw a chance to use my experience, and so I decided to come.

KP: How do you like Krakow compared to Warsaw?

PTA: I like it very much. I like the history and that a lot of tourists come here, and all the Polish people say that Krakow is a nice city. I used to come from Warsaw for the weekends. I wanted to know about it because it’s the old capital, so I would come Saturday morning, go to the Rynek, meet a lot of people. And now I can stay here, and work at an excellent restaurant.

Shane Muldowney: We were very lucky, because I knew how important it would be to have a good chef. Krakow is lacking in good Asian restaurants, and Pong Thep was very serious about the food, because it has to be up to his standards, which was to get the fresh Thai vegetables that aren’t used in Krakow in other restaurants. We had the same idea, really. He said to me that things would have to be at a certain standard in order for him to cook in this kitchen, so we go to great lengths – we import ingredients from Thailand, through Germany. We have suppliers in Vienna just to get the fresh vegetables, which make such a huge difference in cooking. Most people just put in other ingredients, and it’s just not the same.

PTA: A lot of customers know how original [Thai] food tastes. If you don’t do it correctly, the customer will know.

SM: Exactly – people who know Asian food know the difference. It’s more expensive for us, but at least people can taste the difference, and I think that’s important.

KP: How is the reception of Thai food in Poland, based on what you’ve seen so far?

SM: My impression is that Polish people originally didn’t like spicy foods, but now it’s gradually changing. I’ve been planning this [restaurant] in Krakow for two years now, so I’ve had the time to focus on all aspects and how to achieve what I want.

KP: How does Poland compare to Thailand?

PTA: I like Poland. Of course, the Polish people also. When I came here, a lot of people helped me. They are very friendly. Before I came here, people at home asked me, why are you going there – it’s very cold! I said that it’s an adventure for me, to see something different. And then, you know, having stayed 10 years, of course it means that I like it [here].

PTA: When I left I came from nice sunshine and blue seas, and I came to Poland and it was -20. In Thailand we don’t have [winter] jackets, we don’t have gloves. At first, I was always sick. I said that if in three months I can’t adjust, I have to go back to Thailand. But after three months, I found a solution, and now I’m OK.