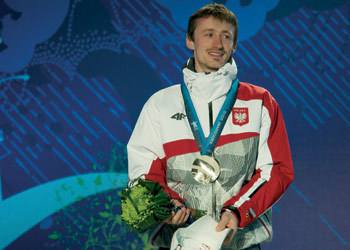 Advertising agencies all over Poland are jamming the phone lines to Adam Małysz’s agent, hoping to jump belatedly on the coattails of Poland’s top ski jumper. Małysz has been here before. During his extraordinary run of successes in the early 2000s, the “Eagle of Wisła” was not only the face of Polish ski jumping; he was ski jumping, and for Poles, he was second in stature only to the Holy Father, Bishop of Rome, Pope John Paul II.

Huge accomplishments in a darker time

Those were different times in Poland. The revolutionary flush of the breakthroughs of the early 1990s had long faded, and the mood was grim. Here in Krakow, the Old Town’s historic buildings were still black with soot from the largely shuttered steel mill that squatted on the rim of the city’s then-notorious Nowa Huta district. The district of Kazimierz consisted of largely vacant, ruined buildings that loomed hauntingly over dark, empty streets. Newspapers overflowed with one dishearteningly cynical political scandal after another, and unemployment topped 25 percent. Entry into “Europe” was a distant possibility, viewed with deep scepticism and anxiety.

In this bleak atmosphere, with little to celebrate, the dark nights of winter were filled with the crackle of radios and flicker of televisions, as Poles eagerly followed the latest news from the glamorous world of elite ski jumping, and their hero, Adam Małysz, rarely failed to scintillate. Adaś, as he was affectionately monikered by his countrymen, jumped with incredible confidence, first winning the Four Hills Tournament, then the individual normal hill in 2001. Next came the Salt Lake City games, where he took a silver and a bronze. In 2001, 2002, and 2003, he stood atop a podium at least once nearly every week, and during this period he won an unprecedented three consecutive World Cups.

Then, as now, the discussion surrounding sport in Poland centred on the search for heroes to carry the standard of the nation into the wider world, and as Poland’s most successful athlete, Małysz filled that role, easing worried minds, lifting sunken hearts, and inspiring pride in Poland.

Of course, the highly specialised discipline of ski jumping does not figure prominently in the minds of sport viewers in most places. Małysz’s popularity in Poland was wildly disproportionate to that which he enjoyed in the world as a whole, which lent a certain comical quality to Małyszmania for outsiders.

As Poland emerged from its funk, joining the European Union, sending half of its menfolk off to work in the United Kingdom, making a brief but nearly respectable showing in Euro 2008, and applying a few much-needed coats of paint to nearly everything, Małysz’s own fortunes on the hill declined. In 2005 and 2006 he continued to win some events, and in 2007 he put together a string of victories reminiscent of his peak years. But by 2009, at age 31, he was only able to produce two World Cup podium places all season, and his admiring throng of supporters, with the exception of a core of a few die-hards, had largely moved on.

Now that Poland looks forward to co-hosting the gala Euro 2012, enjoys an economic growth rate that the United States could envy, and promises to help lead Europe out of the economic stagnation that shackles the continent, Poles don’t really need a Małysz anymore. Besides, there are others who have stepped up to take his place, notably Justyna Kowalczyk, whose awesome performance in cross-country skiing is making her a household name.

The Eagle has not landed just yet

The Adam Małysz who has emerged in the meantime, now relieved of the glare of celebrity that poorly suited him, is a mild, warm, generous man with a deep admiration for his colleagues and a passion for his discipline. He smiles with genuine enthusiasm at the successes of his rivals. It would be unimaginable for him to blurt out the kinds of embittered vitriol that athletes are capable of when they fail to reach their goals. He speaks of Simon Ammann, who has upstaged him for gold medals three times, in only the most glowing terms of admiration. He is, in spirit, the most Olympian of Olympians.

When Małysz started showing signs of returning to form this winter, the Polish media were sceptical. Only when he suddenly took second in Klingenthal on 3 February did some of that old enthusiasm awaken. Coming into these Olympics, Małysz had moved up to sixth in the World Cup, and was beginning to talk about his legs working the way they used to.

There was to be no pot of gold medals at the end of this rainbow, but there were two silvers ones. The “Eagle of Wisła”, who soared for so long and so far carrying the weight of the nation on his slight shoulders, returned triumphantly to crown his career with two more medals in Vancouver.

Poland is rejoicing in his achievements as it has before, but this time, my applause is for the man, rather than the country he has already done so much for. Bravo, Adaś.