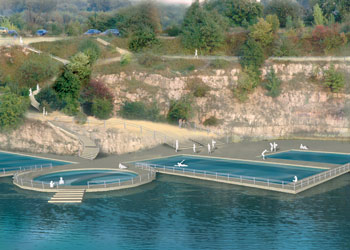 In mid-February, it wasn’t just the members of the Zielony Zakrzówek (Green Zakrzówek) campaign that celebrated a major step forward in the battle to save a 100 hectare piece of open public land – located just 2 km southwest of Wawel – from the threat of development. Other groups fighting against high-handed planning decisions were also encouraged when Krakow’s City Councillors voted to reject changes to a resolution that would have made protection of this area almost impossible. This means that their next, final vote will most likely designate Zakrzówek as an area of outstanding environmental and scenic value and grant it protection under Polish law.

The battle started in 2008, when Krakow’s Planning Department published a new draft of the development plan for Zakrzówek, with a few unconsulted changes. The item that caught local residents’ attention was a change in the zoning of the area; for years the area had been designated as an open and public green space, but now the possibility of housing blocks had been added. In 2006, a Portuguese developer, Gerium Polska Developments, had bought 30ha of the site from a family that had first offered it to the city. At that point there was no chance that the area could be built on, so residents were shocked to see that the new draft allowed for a residential development for some 10,000 people, larger than many Polish towns, to be built on all viable land in Zakrzówek.

It then emerged that a deal between the city authorities and Gerium was being hammered out, whereby part of the 30ha owned by the developer, including the flooded quarry used by divers and swimmers, would be exchanged for some of the viable plots owned by the city. In return, the Krakow Planning Department would create and vote through a development plan for the area, giving the developer the legal basis to gain building permits for a dense residential development in the southeast corner, despite the fact that it is precisely this area that is home to a number of endangered and legally protected plant and butterfly species. Gerium would buy up the remaining plots they needed from private owners and the result would be a housing estate of “luxury” apartments and a park owned and operated by the city.

This development caused conflict among Krakow’s residents, many of whom use this open space for walking, cycling, swimming and climbing. Some welcomed the prospect of the area being cleaned up and the creation of modern recreational facilities – they felt that the loss of what they see as a relatively small piece of scrub land, frequently used for fly tipping, as a fair exchange. Others were horrified by the prospect of the loss of public space to a dense residential estate (with all the traffic problems that entails), the lack of public consultation in the planning process, and by yet another example of the authorities’ eagerness to sell off public green spaces to private developers.

Formed in 2008, the Zielony Zakrzówek association was set up to create a common vision of the development of the area, and its volunteers started the slow and grinding process of lobbying city councillors and galvanising citizens’ support through email, their website and an active Facebook group. By the end of that year they had delivered a petition of over 12,000 signatures as well as an open letter to the mayor of Krakow, signed by over 30 Polish NGOs, calling for the designation of Zakrzówek as an area of outstanding environmental and scenic value. They also started work on their own development plan for the park. Their efforts were rewarded with a draft resolution that Krakow’s Council passed at the first vote in July 2009, albeit with a recommendation for some corrections and clarifications. The owners of the plots that were planned to be bought by Gerium reacted by threatening to fence off their land and prevent any public access whatsoever.

The resolution returned to the council in early 2010 for the second vote, but the changes that had been introduced would have weakened the scope of protection, so councillors were lobbied again by both sides. In February 2010 the council voted to reject the changes and the resolution is to go ahead to the final vote in its original form.

Now that it looks as though the protection of Zakrzówek is forthcoming, there’s space to reflect on the issues raised during this saga. At the root of the problem is the lack of a development plan for Krakow, which would remove the basis for the increasing number of such confrontations. A plan has been in the pipeline for over 20 years but the political will to ratify it is missing, which means that every development in the city has to be considered on its own merits, wasting the time, money and energy of everyone involved in the process.

A second, no less important concern is the lack of provision for effective public consultation and democratic participation in Krakow’s planning and development process. While it’s true that the city did organise two meetings to discuss the issues and come to a compromise, they were open only to invited participants. In the first, protesters were completely outnumbered by supporters, whereas in the second, Zielony Zakrzówek mobilised their other NGO supporters and the situation was reversed. Neither is an effective tactic for deciding the future land use and development of a city of over 800,000 inhabitants.