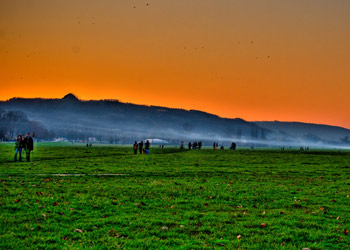 Like everyone from abroad who has decided to live in Krakow, in the back of my mind I know that breathing the air here isn’t terribly good for my health. But how bad is it?

According to Paweł Ciećko, the director of the Malopolska Provincial Inspectorate for Environmental Protection (WIOS), it is “fatalne”, or very bad. In the cities of Europe, Krakow is 16th on the list of the cities with the most polluted air.

Why does Krakow have such bad air quality? It sits in a valley, surrounded by low hills, and is highly developed. Because of the density of development and the surrounding hills, the air gets trapped, and inversions often happen; an inversion is when a layer of warmer air caps the valley, and traps the exhaust we emit daily from our cars and heaters down at the ground level where we breathe. One chance for Krakow is for the wind to come and blow the pollution away. Unfortunately, Krakow is not well blessed with wind: 30 percent of the year no wind blows whatsoever. And when the wind blows, it’s generally on the east-west axis, which brings in the pollution from Silesia and the factories in Skawina in the west, and also some neighbourly pollution from the industrialized area of the Czech Republic around Ostrava. And to the east lies Nowa Huta, which even after the closure of many works remains the main source of industrial pollution in Krakow.

However, the situation today is much better than in the past. After WWII, the authorities decided to proletarianise Krakow, by turning it into an industrial centre. To the east, Nowa Huta was built from scratch, to the south was the pre-war Solvay soda ash factory, which mostly polluted the land and water, but also the air as well. And to the west was the aluminium works in Skawina, whose pollutants included fluoride (a by-product of producing aluminium) that forms an acid that eats glass, much to the detriment of Krakow’s churches. Skawina was closed in 1981, and the Solvay soda works were closed in 1989. Much of Nowa Huta has also closed since the changeover in 1989. The remaining industrial and power stations are much cleaner than they were: industry now produces only 30 percent of the air pollution of Krakow.

Where does the remaining 70 percent of pollution come from? From you and me, unfortunately. Paweł Ciećko from WIOS estimates that around 40 percent of Krakow’s air pollution comes from heating private homes, and 30 percent from transportation, meaning our cars and buses. And the pollution from us is getting worse, not better. More and more people have cars; every day in Krakow more than one and a half million cars move around our city. The rise in prices of electricity and natural gas have pushed more people back to coal heating, or whatever they can find to stick into their ovens.

But how bad is the air we breathe? There are three stations for measuring air quality in Krakow: one on al. Krasińskiego near Jubilat on the river, to measure pollution from traffic, one in Nowa Huta, to measure industrial pollution, and one in Krowodrza, to measure air pollution in a residential area. All the readings from these stations are published daily on the Internet at http://213.17.128.227/iseo.

The most representative measurement for general air pollution is PM10, or particulate matter of less than 10 micrometres. PM10 are airborne particles, and the smaller they are, the deeper they penetrate into our lungs and the more damage they do. The composition of PM10 depends on where you are, but in cities it results from the oxidation of the other gases associated with air pollution (sulphur dioxide [SO2], and all the nitrous oxides [Nox]), as well as all the soot that comes from what we burn. Generally, PM10 is associated with asthma, lung cancer and heart disease. The number of premature deaths in the EU25 countries attributed to human-created PM10 was estimated at 348,000 people in 2000.

What levels of PM10 are considered acceptable? The World Health Organization guidelines set the acceptable concentration of PM10 at 20 μg/m3. In the European Union, the maximum level considered healthy is 40 μg/m3. Krakow regularly averages around 60 μg/m3.

The city has been taking steps to make things better: outer ring roads are being built, so that cars passing through Krakow don’t have to drive through the city centre. There has been a policy since the 70s to push people to convert their coal burning stoves to electricity and gas. All new buildings in Krakow are forbidden from using coal for heating. But Paweł Ciećko from WIOS says any improvement in the air depends largely on people changing their behaviour. Much of the pollution comes from burning the wrong things, in the wrong way: Cracovians often use their stoves to get rid of their garbage, even throwing plastic bottles into the toxic soup we breathe. If people learned how dangerous this is, we could be saved some of the worst pollution. Car use is also increasing yearly, along with its accompanying air pollution: a greater use of mass transit, more parking facilities at the edge of the city, and more travel by bike would also improve air quality.

6 thoughts on “Something in the Air in Krakow”