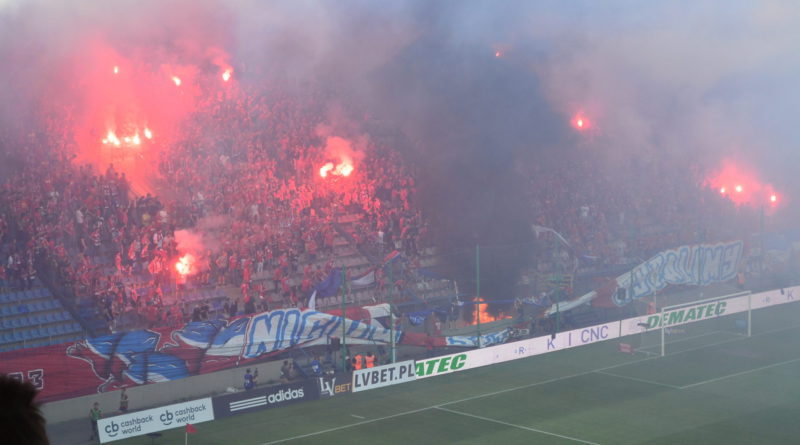 Catch me if you can: Legia out of reach

The Ekstraklasa season 2017-18 has come to an end. The Championship Round Playoffs crowned Legia Warsaw as ‘Mistrzem Polski’ (Champion of Poland), and the Relegation Round sealed the fate of Sandecja Nowy Sącz and Nieciecza, both relegating. The mighty Legia extend its reign over Polish football with a third consecutive league title. At the end of a challenging season Legia finally emerged to grab its fifth league title in the last six years. Adding the Polish Cup they also won this season, the ‘Legionaries’ are unstoppable. Impressive. Wisła Krakow and Górnik Zabrze remain the most titled teams in the Polish football history with 14 titles. However, Legia is now right behind them with 13 titles.

A season of mixed feelings

Wisła Krakow ends the season ranked #6. For the seventh consecutive year, they have not managed to finish in the Top 4. Despite a successful recruitment campaign, a strong season start, and fresh, entertaining football, the team lacked stability. Too many points conceded and repeated mistakes, combined with inefficiency, led to a series of negative results. While they team would win tough away games against big fish, they would then concede home defeats against teams from the league bottom. The sacking of Coach Ramirez in December was unavoidable to stop the pain. On the bright side, the club recruited a gem in the image of Carlitos Lopez, who joined Poland with almost no name recognition to become the season Top Scorer with 24 goals.

Under the new Coach Juan Carrillo’s lead, the second round has been more tactically disciplined. The new system was not as offensive nor spectacular, but more efficient as the team ended the regular season with two defeats in nine games. Wisła secured its participation to the Championship Round Playoffs, and won the Krakow Derby 1-4 at Cracovia. With two defeats, two draws, and three wins, Wisła’s performance in the Playoffs was in the image of the season: inconsistent.

It was a roller-coaster of emotions for Wisła’s last home game of the season against Lech Poznań, starting with honouring local legends Paweł Brozek and Arkadiusz Głowacki. Both players were already part of the Wisła squad, which last won the Championship and the Polish Cup 15 years ago. The Club officials thanked them and their families right before kickoff, and the home fans prepared a great ‘tifo’ banner in their honour. Głowacki (injured) decided to end his career as a player, and Brozek (on the bench) will keep on playing but in another club.

The home fans prepared a second ‘tifo’ banner after the break, which included smoke pyrotechnics. One of them accidentally landed on one of the permanent banners, which burst into flames. A thick dark smoke quickly spread, and the game had to be stopped and firemen rushed in, all leading to mockeries from the away fans. Suffering a 1-0 lead, Wisła pushed to equalize, and what other way to say goodbye than Paweł Brozek coming off the bench 15 minutes from the end to equalize in the stoppage time. Enough to turn the Henryk Reyman Stadium into a volcano.

Now the focus is on next year, and on building a competitive squad able to compete with the big fish. The club will also face another challenge: keep their best player, Carlitos Lopez ‘el Pistolero’, exposed to a high demand from other clubs willing to sign him.

The Cracovia ‘Pasy’ have an animated season behind them. The beginnings were encouraging as the club was keen on avoiding another complicated season. They signed a good couple of new players, but the main achievement has been to convince the successful and experienced Coach Michał Probierz to join Cracovia. Things looked promising in theory, but not really in practice. With only two wins in 14 games, the Pasy quickly reached the league bottom. Coach Probierz’s philosophy took time to be assimilated – however, hard work paid off and the team got slowly back on track, gaining more and more points until they managed to exit the relegation zone before Christmas.

It took time but a fresh dynamic settled in the team with players showing a new fighting spirit, greatly appreciated by the fans. The club signed more players during the winter break, including the return of a former local hero Deniss Rakels, on loan from Reading FC. Cracovia maintained the pace and extended their strong performances after the winter break. The club was even very close to surprising the entire league by qualifying for the Championship Round Playoffs, which would have been a true fairytale. They did not manage and it was not a huge disappointment, given the great recovery the team experienced.

The revelation of the second round

In the Playoffs, the Pasy outclassed the other teams to end top of the Relegation Round final table. Except for two defeats, they managed to run the show and dominate teams such as Lechia Gdańsk and Śląsk Wrocław. They quickly managed to secure points and continue the good work started after the winter break. Without any star player, the team found the resources and the key to building a strong block and fighting for each other. This has yielded great results. Coach Probierz’s men showed promising performances for the next season, hoping to see the good work extend. It was also Krzysztof Piątek resurrection, as he scored 12 goals in the last 13 games of the season. The 22-years-old striker probably played his farewell season, as the club promised him they would not reject any offer from foreign clubs.

For Cracovia, 2018 started with a home game behind closed doors against Legia, as a sanction for the fans’ behavior against Wisła. It extended and became a fan boycott, unhappy with the club’s lack of communication and stricter measures around tickets selling. The consequence was seven home games played in a desperately empty stadium. A tough hit for the club’s budget but also for the players. However, this has been quite a paradox given their strong second round and Playoffs performances. Let’s hope this will be resolved before the new season begins.