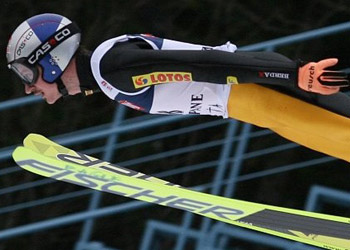 Like the rest of the nation I am now an armchair cross-country skiing expert. Poland’s Justyna Kowalczyk has won two Olympic gongs and is in the running for more. Veteran ski jumper Adam Małysz has also bagged two and re-ignited the nation’s passion for watching small moustachioed men hurl themselves down precipitous icy slopes into yawning space. Men with large stomachs and about as much first hand knowledge of ski slopes as they have of quantum mechanics earnestly discuss the finer points of Telemark landing techniques in pubs across the land. Poland’s glow of pride is visible from space.

Polish pride is a powerful thing and it has a uniquely Polish character. I like to sum it up with the phrase: every Pole is Poland. When a Pole stands on the Olympic rostrum, Poland sees itself standing there. Equally, when a Pole is filmed sleeping rough in a foreign capital the entire country squirms with shame. It’s a symptom of Polish history. For centuries Polish identity resided in a community living under occupation or in exile, not in the institutions and territories of a state. The Polish state now exists in a free and self-determined form, but old habits die hard. Each individual Pole is still seen as the true repository of Polishness.

Poles get frustratingly few opportunities to wallow in the international adulation of one of its own. This is also an accident of history, of course. The true superstars of Western culture are actors, pop idols and sportsmen. To be one of the first two you need to speak English and come from a culture that hasn’t been isolated behind an Iron Curtain for 50 years. One day we might see the Polish equivalent of a Gerard Depardieu or a Sophia Loren – genuinely global household names – but it’s going to take a while. Sport remains Poland’s best bet for the international recognition it craves.

Most frustrating of all for Poles is the annoying habit of its brightest and best to do their thing anywhere other than in Poland. Take the three really big names in Polish achievement: Copernicus, Chopin and Curie. Most people outside of Poland have no idea they were Polish. Imagine how annoying it would be if everybody thought Shakespeare was Peruvian or Elvis was Dutch. You can see how this kind of thing could get to a nation. This year is the 200th anniversary of Chopin’s birth and the country is going all out to make sure the world knows their Fryderyk was Polish. It won’t work of course. Just as insisting on calling her Marie Skłodowska Curie doesn’t work.

I strongly believe that Poland’s peculiarly virulent dislike of its politicians has a lot to do with this sensitivity to national pride. They have an uncanny knack of electing people who look like they will be fine ambassadors on the international stage, only to be disappointed. Donald Tusk became prime minister because he seemed to be the kind of guy who could stand on a platform with, say, the president of France, and not look like an idiot. Radosław Sikorski is highly likely to become the next president for exactly the same reason. When it comes down to it, people disapprove of the current president largely because he looks kind of klutzy at international conferences and seems unlikely to say something charmingly witty to Sarkozy’s wife.