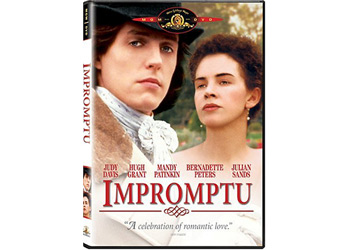 If ever there was a time to release a Chopin album then it’s now. Bookshop windows are overflowing with Chopin paraphernalia, the papers are packed with tributes, and pianists are hammering out sonatas and mazurkas around the clock. A couple of weeks ago, it was announced that U.S. space shuttle Endeavour will blast off into the stratosphere bearing a CD of the Polish composer’s classics.

Being a Brit in Poland, it seemed like an intriguing idea to have a look at Chopin’s Anglo-Saxon connections, what with all the 200th anniversary celebrations. After all, he’d travelled extensively across the Isles, feted in concert halls throughout the kingdom. Perhaps he had some charming memories of skipping through the countryside, or hobnobbing with lords and ladies. Maybe he’d even fallen for some dainty “English Rose”…

However, although Chopin concedes that the English were “kind-hearted”, that’s about the extent of his good words for the Brits. “Here, whatever is not boring, is not English,” he wrote to a friend. “Every creature seems to have a screw loose,” he reflected. “God help them.”

London comes in for a special bashing. “If only London were not so dark, and the people not so heavy, and if there were no fogs or smells of soot…” he laments. What’s more, musicians, it seems, were rather taken for granted by the English nobs. “It is all one to them whether music is good or bad, since they have to hear it from morning till night. For here they have flower-shows with music, dinners with music, sales with music…. No one speaks or writes of any musician as an artist.”

OK, so he wasn’t overly enamoured with the English. But not to worry, I’m actually half Scottish. Surely he must have fallen for the land of Sean Connery? The heather on the hills, the ”bonnie” ladies… Well, not exactly: “The population here is ugly,” he writes. “On the other hand, the cows are magnificent…”

Bearing all this in mind, one can only wonder what the composer would have thought about the casting of Hollywood’s most lavish Chopin film to date, Impromptu. For who else was chosen to play the Polish pianist than that most quintessentially English of fellows, Hugh Grant. Yes, I kid you not. No one in Poland or England seems to have heard of the 1991 film (even Chopin’s biographer was unaware of the flick). How could that be? Well, due to all this, I thought it my national duty to root out the movie.

Can Hugh Grant do a convincing Polish accent? Is the great composer laughing down from his keyboard up in heavens, or is he shaking his fist in fury? By the time our March edition hits the printers, I should know the answer to these profound questions….