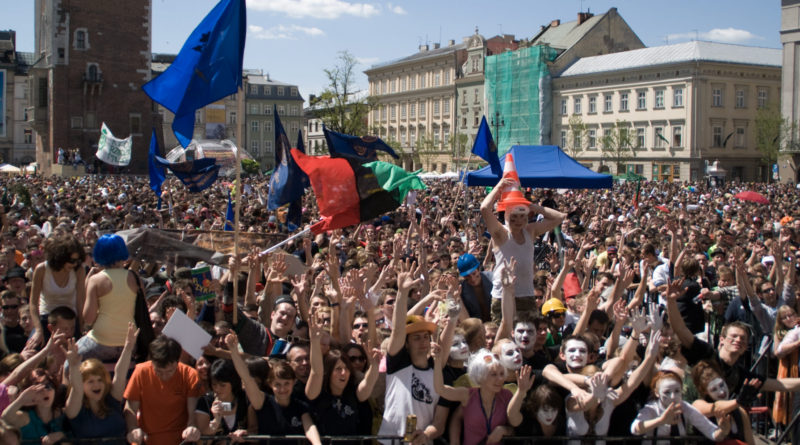 Monday marked the beginning of the biggest student event in the history of all academics since John Belushi decided throw on a toga. And while I’m exaggerating, and my Animal House reference may have been lost on a significant portion of you, it’s still a pretty big deal. To some, Juvenalia may be a nuisance, but to the younger population, it is a rite of passage and a welcome festive hiatus before second semester exam sessions begin.

The event itself is usually jam packed full of performances, parties, and outdoor concerts, all to the tune of booze, booze, booze. But one doesn’t need to be a lush in order to partake in the fesitivities, nor do they even need to be a current student at any of Krakow’s presitigous universities. Juvenalia does not discriminate and all are welcome to participate.

As for the lineup for this year’s series of concerts, event organizers have really brought their “A” game, inviting cult rock veterans such as Strachy Na Lachy and Lao Che as well as crowd favorites including Organek, Brodka, and Fisz Emade Tworzywo. Also worth catching are this year’s hottest acts Mioush, Daria Zawialów, and Quebonafide. From dream pop to hip hop, check out The Krakow Post’s top concert picks for the week below!

Top Pick for Wednesday, May 16:

Though there may be a few concerts and events to catch in the meantime, Juvenalia’s musical goodness really doesn’t kick off till this Wednesday’s show held in front of Klub Zaczek. Our pick for the night is none other than one of the dreamiest dream pop duos Poland has to offer, The Dumplings. Hailing from Zabrze, Poland, The Dumplings gained critical acclaim after appearing on the internet talk show 20m2 and releasing two studio albums since then. The band’s most popular singles, “Nie Gotujemy” (“We don’t cook”) and “Kocham Być z Toba” (“I love being with you”), touch on serious issues such as domestic violence, but leave much up to interpertation alongside lead singer Justyna Świes’s mythical crooning. Pair that with some snare heavy percussion and ambient guitar and you’ve got yourself a recipe for the best live dreampop show you can catch this side of the Atlantic.

Top Pick for Thursday, May 17th:

This one’s a doozy. The lineup’s so good you should literally already be there camping out and anticipating the musical greatness that is about to ensue. Be sure not to leave until the dust has settled! That being said, I recommend…

Founded in 2013 by frontman Tomasz Organek, the group just straight up oozes rock ‘n’ roll on stage. They’re a little bit country. They’re a little bit rock ‘n ‘roll. And they’re actually everything in between as Organek skillfully navigates a variety of musical genres from surf rock to blue grass. And while their debut album Głupi (Stupid) boasts a number of successful singles and reached platinum by 2017, the band has really outdone themselves by exploring even more of an experimental sound on their second release, Czarna Madonna (Black Madonna). No stranger to enrapturing large audiences. With vocals reminiscent of Danzig circa How the Gods Kill, Organek is sure to deliver with rock heavy guitar riffs and Southern sentiment in their lyrics.

Also worth catching is hip hop’s golden child Miuosh. Miuosh has been on the scene since the early millennium, but has really come into his own and these past few years by collaborating with the likes of Katarzyna Nosowska of Hey as well as renowned composer Andrzej Smolik. A force to be reckoned with on the muisc scene, Miuosh is a true Silesian at heart, and his music resonates his deep ties to his home city Katowice. Miuosh is no less a poet than he is a rap superstar. His lyrics explore a number of themes pertaining to love, life, and nearly everything the average joe could possibly relate to. And while most of his music has taken on more of an electro vibe, Miuosh has experimented with a variety of different genres as well, not foresaking his authenticity in the meantime. In a musical genre oversaturated with objectifying women and ‘chasing paper’, Miuosh is a revitalizing voice that speaks for our generation.

Top Pick for Friday May 18:

Slavic beauty Daria Zawiałów exploded onto the scene in 2016 during Poznan’s annual musical showcase, Enea Spring Break (think SXSW featuring Europe’s hottest rising musical talent). It was around this time that she released her first stuido album A Kysz! (Be gone)! with the deeply erotic single “Malinowy Chruśniak” (“Raspberry Thicket”) reaching over 3 million views on YouTube. For a 90s baby, Daria Zawiałów possesses a timlessly soulful voice with lyrics that exert an wisdom beyond her years. As for live performances, Daria has been performing on stage since girlhood, but now commands audiences with her deep and rugged vocals like a true rock goddess. Get it, girl.

There you have it, folks! Our top concert picks for this years Juvenalia event. However, the fun doesn’t stop there with live perfomances by Nocny Kochanek, Hunter, Enej, Łąki Łan, and others going on into the weekend. So put down the books and turn up!

7 thoughts on “Your guide to this week’s Juvenalia concerts”