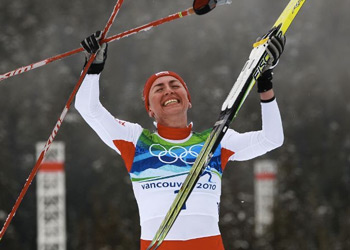 Poland’s first gold comes on the second-to-last day of the Vancouver 2010 Winter Olympic Games, as Justyna Kowalczyk crossed the line first in the ladies 30 km cross-country skiing classic mass start in Whistler Olympic Park. Kowalczyk was only one third of a second ahead of three-time 2010 gold medallist, the Norwegian Marit Bjoergen. The two were considered the favourites for the event.

Kowalczyk and Bjoergen were at the head of the pack through much of the race, only breaking away from the group in the last few kilometres. Kowalczyk trailed Bjoergen through most of the last five kilometres, pacing herself for the challenge of the last kilometre. The dramatic finish had Kowalczyk leading into the final few hundred metres with Bjoergen hot on her trail, and Bjoergen poured it on to challenge Kowalczyk, even appearing to overtake the Pole briefly in the last 30 metres, when Kowalczyk showed the trait that has characterized her career, finding the inner resources to answer the challenge and pushing ahead to win by less than the length of a ski.

Kowalczyk said of the finish, “The last kilometre was a pure battle”.

The 30 km classic is the longest ladies’ race in the games. It is run in the classic technique, using a forward and back motion of the skis, assisted by pushes with the poles. Kowalczyk told reporters, “I knew that 30 km is my distance and the classic is my style”.

After the event, Kowalczyk’s last, she had a bronze, a silver, and a now a gold medal in these Winter Games. Her first place finish gives Poland its second-ever winter gold, 38 years after Wojciech Fortuna won one in ski jumping in 1978 in Sapporo, Japan. Combined with two silvers taken by Adam Małysz and a bronze in speed skating, the medal count makes the Vancouver Winter Games the best in Polish history, ranking 15th among the nations competing as of Saturday night.

The voluble Kowalczyk has been at the centre of some controversy at the games, complaining that the courses were less than Olympian in their level of challenge. There was also some sniping between Kowalczyk and her main rival Bjoergen. Kowalczyk flatly stated this week that Bjoergen’s strong performances in the current season are a result of her use of an asthma medication, Salbutamol, that is usually banned as a performance enhancing substance, but which the World Anti-Doping Agency has permitted Bjoergen to use. The Norwegian team categorically denies any advantage, firing back that Kowalczyk herself was banned from competition for two years in 2005 on doping charges for using Dexamethsone, a steroid used as an anti-inflammatory. The sentence was later reduced to about six months.

Kowalczyk referred to the exchange in an interview with Polish television after the race, saying that her memories of the games will be “not that great”, pointing out that while she felt that her performances were some of her strongest ever, “from the perspective of sport it was fantastic. As far as all the emotions and unnecessary bickering, it leaves a very bad taste in my mouth.”

Nevertheless, she was open about her rivalry with the Norwegian racer: “It was great to win against Marit”, adding, “actually it’s worked out now that even Marit doesn’t have what I have. I have the World Championship, the World Cup, the Tour de Ski, which Marit doesn’t have, and now I have an Olympic gold medal.”

“In order to win against Marit I had to give it my all,” she said.