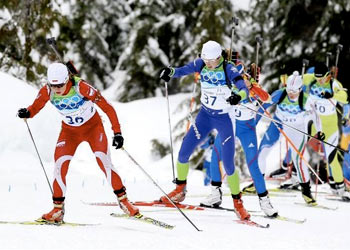 Accusations are suddenly whirling around the Polish biathlon team, as it has been revealed that they were provided with uniforms bearing the flag of Monaco for their events in the 2010 Vancouver Olympics, rather than the Polish flag. The flags of the two countries are effectively identical, except that the order of colours is inverted. The error appears to have gone unnoticed for the first 12 days of the games, as the red and white flag is displayed against a red background, with only a small white border above the red field.

The athletes went to the press only after all biathlon events had been run, when Agnieszka Cyl railed out against the uniform situation, setting off a media chain reaction ending in accusations of conflict of interest and revealing political rifts within the Polish Biathlon Federation. Other Polish biathlon team members have now also expressed their horror at competing on the world stage with the flag of another country on the sleeves and thighs. The athletes did not want to draw attention to the embarrassing blunder while they were still competing. “No one noticed the flags, and we didn’t want to stir up a scandal earlier.”

In addition to bearing the flag of the wrong country, reports have also emerged that the skiing suits were of very low quality, fitting poorly and being of much poorer workmanship than the outfits worn by the Swedish team, which were made by the same company. Cyl told Gazeta Sport that, “The quality was really poor. We thought it was scandalous, and we submitted a written protest to the person responsible for providing the uniforms, vice-president of the [Polish Biathlon] Federation Leszek Stelmach, but as an answer we were told to worry about our performance and not whining about the uniforms.”

Stelmach has emerged as a person of particular interest in the scandal. He is sits on the board of the federation, and is also a sales representative of the companies that sponsor the team, providing their gear – Tenson and Craft. According to the organisation’s president, Zbigniew Waśkiewicz, Stelmach led the group of board members who selected the sponsor and that, “The conflict of interest was obvious, but we lost the vote. Six people voted for Tenson and Craft, and four against. The four of us stated that the choice was unethical. The contract has my signature and Stelmach’s, but not as vice-president — as the sponsor.” He said that he, as pesident, and Vice-president Stelmach have not spoken to each other in person or by telephone for six months as a result of the deal.

Stelmach defended his position, turning the focus on the performance of the biathletes instead, noting that the team did not win any medals. “The majority of the information that I am hearing is lies. The outfits provided by Craft are of the same quality as the ones that the Swedes competed in, and they won medals. Craft is a leader in the market and I regard the allegations that have been made about us by the athletes as false. They would be better off concerning themselves with the results of the competition in Vancouver,” Stelmach told the press. “Other than in the ladies 15k, I feel that we were poorly represented.”

Weronika Nowkowska told reporters at the airport on her return from Canada: “For me it was very sad that I did not represent the [national] colours of the white and red — not quite. I don’t really want to get into in the politics of the federation, because really this is a matter of federation politics, but I think this was just unethical, and I have nothing more to say on this matter.”