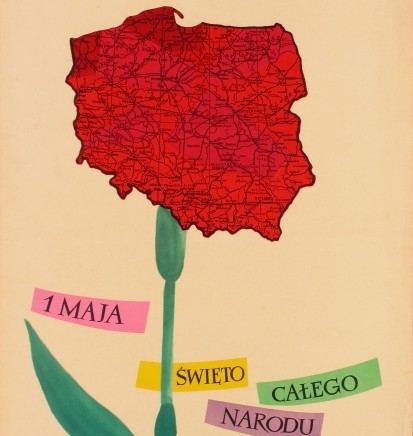 It has been nearly 30 years since the People’s Republic of Poland gave way to restored democracy under immense public pressure led by, ironically, the powerful shipbuilders’ union Solidarity. Now the Third Polish Republic, a member of the European Union and NATO, has been steadily moving further in the direction of Western-inspired neoliberalism.

Yet the “specter of communism” famously described by Karl Marx and Friedrich Engels in their 1848 Communist Manifesto continues to haunt Poland – though it is not a specter of the future, but of the past. Arguably, it continues to be the most important and sensitive cultural/historical touchstone of the nation, and, from the rhetoric of Poland’s major political players and activists, it seems at times that half of contemporary public policy continues to be a reaction toward or against the legacy of the former communist regime.

Labor Day is a perfect encapsulation of this struggle in the national imagination. That is, if the holiday should even be called that. Legally it is known as Święto Państwowe, which literally just translates to “State Holiday.” Government media emphasize that it is also a Catholic feast day, and it is lumped in with Constitution Day as a three-day “Majówka” – May weekend. It has become all but divorced from its roots in the international labor movement.

Other sources of information are even more openly disparaging of the origins and history of Labor Day in Poland. “Really no one cares about the original significance of this day,” one English-language website claims, “and its initial importance is melting away under the heat (we hope) of the May sun to become just another day off to enjoy.”

Another tells readers that the government maintained May 1st as a holiday “to keep the plebiscite [sic] happy […] without any red flag and party badge nonsense. As such,” they continue, “it resembles the American Labor Day, which is basically a day off for the sake of having a day off. Amen to that.”

Unabashed editorializing aside, are they right about the current state of May 1st?

It is ironic that these writers point to the United States as a place where Labor Day is an arbitrary holiday – since Labor Day actually has its roots there. Socialists and communists chose May 1st to be International Workers’ Day in the late 19th century to commemorate the Haymarket massacre, in which police officers killed several workers who were striking for an eight-hour workday in Chicago in early May 1886. (Labor Day in the US is now observed in September, for reasons that historians disagree on.)

International Workers’ Day was first celebrated in Poland – or, more precisely, in what were then the Polish areas that had been partitioned between Austria, Prussia, and (especially) Russia – in 1890, led by the short-lived II Proletariat revolutionary group. It continued to be marked largely by leftist groups through the Second Polish Republic in the interwar period, a time when the Communist Party was illegal.

It was during the communist rule of the People’s Republic of Poland following the Second World War that Labor Day (Święto Pracy) attained the height of both its popularity and notoriety in the country. Enormous parades were organized in every city. Led by top members of the communist Polish United Workers’ Party (PZPR), these marches featured veterans of the labor movement, student activists, and representatives of various professions with the traditional tools and attire of their trades. There were also large, elaborate floats with sculptures and performers, gigantic signs bearing images of Lenin and other ideological icons, and even satirical symbols of the “evils of the capitalist West” (Churchill and Truman; models of nuclear bombs; mock Zyklon B canisters).

These parades were anything but spontaneous outbreaks of civic pride, though. Attendance was mandatory for many, and the events were strictly and centrally planned, taking more or less direct inspiration from Moscow (whose parades were also broadcast on Polish television stations).

As (in the words of Polish magazine Wprost) “the nameday of communism,” May 1st became a focal point for those who were against it as well. In 1955, the staunchly anti-communist Pope Pius XII proclaimed it to be the new feast day of “St. Joseph the Worker,” as a Catholic alternative. Later, in the 1980s, the then-underground Solidarity movement organized May Day demonstrations in a direct challenge to the ruling regime.

With the fall of communism at the end of 1989, the new government of the Third (and current) Polish Republic has distanced May 1st from the labor movement, and it retains negative connotations for many Poles because of this history. It is now conflated in the public mind with “May Day” (rooted in pre-Christian spring festivals), the aforementioned Catholic Feast Day, the anniversary of Poland’s 2004 accession to the European Union, and Constitution Day, which follows on the 3rd – or it is taken for granted entirely as an arbitrary day off work.

Nevertheless, leftists in Poland continue to try to keep the original spirit of the holiday alive. There are still (smaller, grassroots-organized) annual marches in major Polish cities on May 1st to promote the rights of everyday workers, who have encountered different issues under capitalism. The chief organizer is the All-Poland Alliance of Trade Unions (OPZZ), which claims 500,000 members of organized laborers from various fields, supported by left-wing parties such as Razem and SLD. These days, echoing the 19th century, they promote issues such as higher pay and reduced working hours for employees.

Now, too, supporters face a resurgence of challenges from the far right. This year in Warsaw there was also a small Labor Day march of Polish neo-Nazis, who were blocked by peaceful counter-protesters.

What will be the future of May 1st in Poland? It all depends on whether or not contemporary leftists are able to reclaim it from the still-fresh legacy of communism – and if the general population still believes it necessary to set aside a special day to recognize the struggle and celebration of Poles who sell their labor in an increasingly neoliberal system.