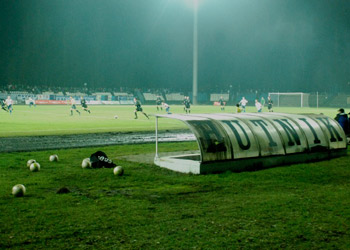 The decision was made today, Tuesday 22 February, to bring football back to Krakow. Both Krakow teams will be playing in Nowa Huta until at least the end of the current season. No matches in the top Polish league have been played in the city for over six months, as both local Ekstaklasa sides have been playing in the Silesian town of Sosnowiec during the renovation of Wisła’s stadium and the construction of an entirely new stadium across the Błonie on the site of Cracovia’s old, dilapidated pitch.

The first fixture to be played at Suche Stawy [the Dry Ponds] will be between the Ekstraklasa’s ninth-place Cracovia and second-place Legia Warszawa this Friday at 20:00, followed by league leader Wisła versus Arka Gdynia on 5 March, also at 20:00, pending a decision by the club next Tuesday.

The temporary home of football in Krakow, Suche Stawy, has been undergoing modifications and repairs at a feverish pace as crews have been working to meet Ekstraklasa requirements. The pitch itself is still in the process of an upgrade. Much of the infrastructure being used to prepare the facility was salvaged from the Wisła and Cracovia stadiums.

The lights at the stadium were only installed in November of last year, and were used to illuminate the final match played by the second-league club that owns the venue, Hutnik Krakow SSA. Hutnik won that match, then promptly disintegrated in a storm of acrimonious recriminations including indictments for match fixing in previous seasons. After years of financial problems, owing its players, trainers, and staff months of back pay, the club recently took the decision to dissolve the team. Hutink’s supporters have resolved to abandon the organization in favour of starting a new unaffiliated Hutnik football club beginning in the bottom league.

Sharing a venue will present extra dimensions of challenges to the Małopolska archrivals, whose supporters refer to their relationship as nothing less than a “Holy War”. As one measure to prevent incidents of hooliganism, Cracovia’s Sports Infrastructure Administration has decided not to sell tickets before matches at the box office at the Nowa Huta venue, citing safety concerns. Fans will also need fan identification cards to attend, a system that has been in place for both clubs and many others for some time.

A fixture between Wisła and Cracovia — an always memorable and sometimes frightening experience for the city — is set to take place on Wednesday, 11 May.