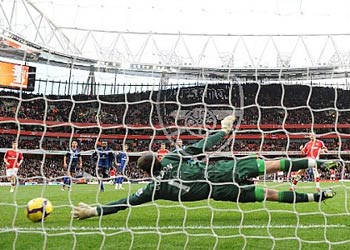 Despite reports that Arsenal trainer Arsene Wenger aimed to give young Polish goaltender Łukasz Fabiański a shot at redemption in today’s match against Sunderland, Fabiański sat the game out. The game marked a return to winning ways for Arsenal, who have struggled recently against the top teams in the top English football league.

Fabiański had a rough week, committing two costly and humiliating errors in Wednesday’s Champions League fixture against top Portuguese club FC Porto. He gave away two goals to the home side, putting the Gunners’ chances at advancement in the European elite league in dire jeopardy. After the horror of driving the ball into his own net on a misplayed cross from Porto’s Silvestre Varela, the 24-year-old Fabiański went on to blunder by handing the ball to referee Martin Hansson, the same who missed Henry’s handball against Ireland in November. Immediately after a foul was called against Fabiański for illegally handling the ball, allowing a quick indirect kick by Ruben Micael to find Radamel Falcao, who shot it in easily from short range, sending the Gunners down 1:2.

Wenger was livid at Hansson’s decision to give the free kick so quickly, stating in the press that Hansson is “incompetent”, while conceding that he does not believe him to be “dishonest”.

The incidents were followed by declarations of solidarity with the young Pole from Arsenal captain Fabregas and trainer Wenger, but the decision was made Saturday to play the injured Manuel Almunia instead.

Fabiański received his first shot at Champions League glory thanks to an injury to Almunia, who had injured a finger in training. Fabiański began his career with success in the Polish league, playing for Legia Warszawa, and was signed to the London squad in 2007, where he hoped to achieve successes to equal those of Jerzy Dudek and Artur Boruc, fellow Polish keepers to play in the United Kingdom. Boruc had also committed his own nightmarish gaffe, allowing a fumbled back pass into his own goal as the Polish national side’s keeper in a match against Northern Ireland in March of last year.

Arsenal’s win against Sunderland came as a great relief to their supporters, who had seen their club lose to Premiership leaders Liverpool, Chelsea, and Man U over the past month, despite remaining in contention for the Premiership title. For Sunderland, the disappointment was amplified by having kept the game very close while Arsenal produced the lion’s share of chances, finally conceding their second goal in a penalty taken by Fabregas in added time. Sunderland has not won a game in 13 fixtures and faces relegation.

Artur Boruc maintained a clean sheet at home in Glasgow Saturday to win against Dundee United in the Scottish League by 1:0.