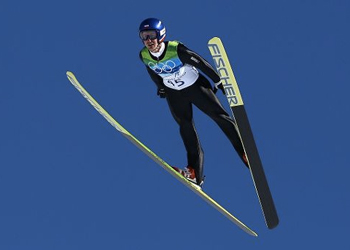 Adam Małysz took his second silver medal in the Vancouver Olympic Games on Saturday, 20 February. The Polish jumper was second in the first round only to be outdone by the unstoppable Simon Ammann, who won an unprecedented fourth gold in individual events in the Winter Games. Małysz’s performance thrilled the many Polish fans gathered in Whistler to cheer on the resurgent national hero, who now has achieved the top result amongst Polish competitors in the games.

As of a few months ago, such a strong placing in the games would not have seemed likely, as the jumper from the Silesian town of Wisła had fallen from his once unbeatable form in recent seasons. Małysz had dramatically improved in form leading up to the Olympics, and his return to the Olympic podium has produced an enormous surge in excitement around the three-time World Cup winner in this country.

The next event in men’s ski jumping in Vancouver is set to take place on Monday, 22 February.