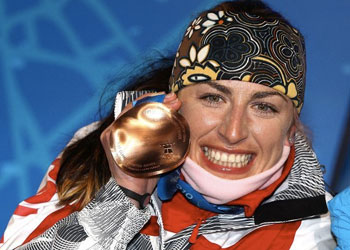 Now Justyna Kowalczyk needs only a gold to complete her collection of Vancouver medals, after taking the bronze in the women’s pursuit. She finished third in a dramatic duel with Norway’s Kristin Stoermer Steira, lunging forward with her right foot to hang onto third by a fraction of a second.

Friday’s race was the pursuit event, in which the skiers start in a “pyramid”, where the first starter is the leader from the previous race, and the rest of the field lines up behind them also according to their placings. The first half of the race (7.5 km) is run using the classic style, meaning that the competitors keep their skis parallel, moving forward using a running motion aided by their poles. The second half is run using the free technique, which employs an ice-skating motion, pushing off with the skis to the side. At the midpoint of the race the racers enter the stadium and change equipment from classic skis and poles to freestyle skis and poles. The first across the finish line is the winner.

Kowalczyk finished the first leg in second place, then fell to fourth in the free technique segment in a tight pack led by Norwegians Marit Bjoergen and Kristin Stoermer Stiera. With about thee kilometres to go, Kowalczyk made her move, overtaking Anna Haag of Finland, then a few hundred metres further on moved into second as Bjoergen put more distance between herself and the pack.

As Kowalczyk raced into the final stretch the weakest element of Kowalczyk’s skiing, her glide, worked against her. Haag launched a counterattack, overtaking the Pole, pushing by her into second. It was then Steira’s turn to make her move, surging ahead to challenge Kowalczyk, and at the finish the racers were so close that it was impossible to judge who had placed third with the naked eye. A long photo finish delay ended showing Kowalczyk in third by centimetres thanks only to a lunge forward with her ski, making it to the podium by only one-tenth of a second.

This medal is Kowalczyk’s third overall; she took the silver in the individual sprint earlier this week, and the bronze in the 30 km in Turin in 2006. This is the second gold this week for Bjoergen, who also won the individual sprint, to go with the bronze she won in Monday’s 10 k. She also has two silvers from previous Olympics. Haag’s medal was her first, and Stoermer Steira continues to suffer through a sequence of unsatisfying fourth-place Olympic finishes beginning four years ago in Torino.

The ladies’ cross-country skiers will race again on Monday, 22 February, in the team sprint.