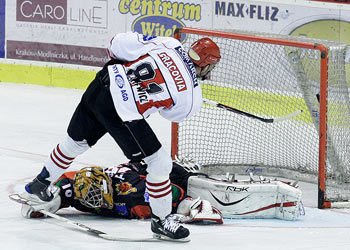 Cracovia’s top scorer Leszek Laszkiewicz was quoted following an international tournament game against Austria’s top squad, the Salzburg Red Bulls:“I’d like to play a game like this every day. On the ice, there wasn’t even a moment to think, not like in the Polish league.” Now he may get his wish.

The club has received a proposition to join the Austrian hockey league. “We are thinking about it seriously,” says owner Prof. Janusz Filipiak. The possible change has been met with both enthusiasm and scepticism from fans and players.

Representatives of the Austrian Erste Bank Eishockey Liga were present at the first match of this season’s playoffs against Energa Stoczniowiec to investigate the logistical and security issues involved. The Austrian league has been adopting top clubs from other countries, and four now play in the league, including two clubs from Ljubjana, Slovenia, one from Hungary, and one from Zagreb, Croatia.

So far, the most enthusiastic reception of the possible move has been from Cracovia’s head coach Rudolf Rohacek, seeing a chance to improve his squad by playing against tougher opponents.

Cracovia is currently home to a significant portion of Poland’s national team, including many players with international experience. The possible move would give the team the opportunity to play against a much higher level of competitors than the PLH can provide, ostensibly improving their game, and with it, Poland’s chances in international competition. Conversely, it could weaken the remainder of the league by depriving it of its champion and many key players, at the same time rendering irrelevant historic and contemporary rivalries with such squads as Wojas Podhale Nowy Targ and GKS Tychy.

The Cracovian club returned from the brink of bankruptcy in recent years when it was acquired by Polish computer technology giant Comarch, and their rink has been overhauled, with the addition of such basics as tiered seating and plumbing in recent years. While the renovations were seriously set back by the explosion of the fuel tanks of their Zamboni-style ice surfacing machine in 2008, which damaged buildings and destroyed the team locker room, their success on the ice has only grown, taking three of the past four years’ championships, and putting on a respectable showing in the Continental Cup in 2009.

Other proposals to improve the level of play in the country have also been circulating, including the almost equally radical proposition of merging the many clubs in the Katowice area into one superclub, a suggestion deemed unacceptable to the ardent supporters of GKS Tychy in particular.

Whether Cracovia is outgrowing the Polish league or not is now a question of debate, certainly in the light of the current season’s still-uncertain playoff outcome, as should be the possibility of combining leagues wholesale, creating a mulit-tiered central European league, including such sinking leagues as those in the Baltic states, where economic issues threaten the sport altogether.