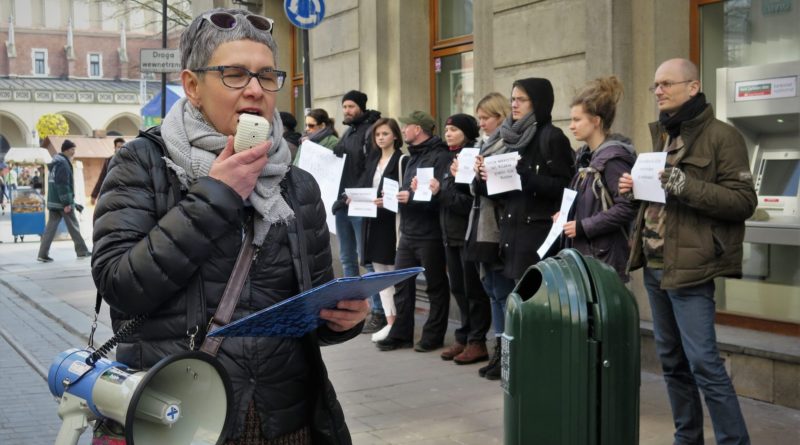 On Saturday afternoon, protesters lined up along Szewska Street in the city centre to protest the Turkish-backed invasion of the Kurdish city of Afrin in Syria. Passersby looked on with interest as the protesters stood mute in a chain, holding placards and banners denouncing the actions of the Turkish government and its allies.

The protest was organised as part of the worldwide event #WorldAfrinDay by Witajcie w Krakowie (Welcome to Krakow), a local political organisation working for the benefit of refugees in the city and elsewhere. The #WorldAfrinDay protests spanned the globe, from Argentina to England, Germany and Afghanistan. Several were organised in various Polish cities, including Szczecin, Toruń, and Warsaw. In Krakow, some 50 people participated.

What were they protesting against?

According to Witajcie w Krakowie, the protest was organised because “the call of Kurdish men and women for help is consistently ignored by world powers. Recent Western allies in the fight against ISIS have abandoned them. We disagree with their lives and rights being silently sacrificed by ‘democratic’ Western governments in the name of geopolitical interests!”
In January 2018, Turkey and its allies launched an offensive operation across the Turkish-Syrian border against Afrin and its surrounding areas. The purpose of the operation was to completely oust the Kurdish-led Democratic Union Party (PYD), which has controlled the region since 2012 when the Syrian government withdrew from the city as a consequence of the civil war.

Under the PYD, Afrin became something rare: a flourishing democratic experiment in the midst of a brutal conflict. Afrin and its associated regions – collectively known as Rojava – have remained relatively stable the past few years, attracting many refugees from the surrounding conflict, including many from the devastated nearby city of Aleppo. Further, the armed branches of the PYD, the People’s Defense Forces and Women’s Defense Forces (YPG/YPJ), have been instrumental in the fight against the Islamic State in the region. Because of this, they enjoyed material support from the US for some time, which was later withdrawn when it caused conflict between the US and its NATO ally Turkey.

Beginning with artillery shelling and air raids, and quickly escalating to ground troop involvement, the assault is now in its terminal phase after two months of heavy fighting. The Turkish-backed Free Syrian Army (TFSA), providing the principal ground forces for the attack, have declared they are now in complete control of the city.

Who are Witajcie w Krakowie?

Witajcie w Krakowie hosts talks, panels and cultural events, and has also organised similar protests – against the siege of Aleppo in 2016, and more recently in early March, against the assault on the city of Ghouta in eastern Syria. They recently hosted a talk with Kurdish activist and academic Dilar Dirik. Members say they will continue to organise such events when necessary.

2 thoughts on “Cracovians organize in solidarity with Kurds in Syria”