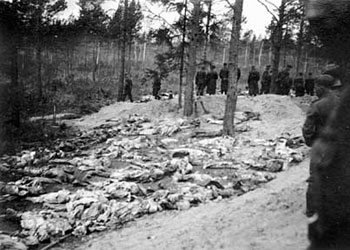 In August 2009, 13 Poles filed a lawsuit against the Russian government, hoping to finally see justice regarding the deaths of their relatives in the 1940 Katyń massacre, and now the Polish government has joined them. The government will act as a third party participant in the class action suit over the Katyń massacre. The case will be brought before the European Court of Human Rights, which has set 19 March as the date by which the Russian government must respond to the charges.

One of the plaintiffs, Witomiła Wołk-Jezierska, the daughter of murdered officer Wincent Wołk, has struggled for years to hold the Russian government accountable for the crimes of 1940. Along with several other family members of the victims, she had tried in vain to bring up charges in the Russian court system, before bringing the case before the European Court of Human Rights.