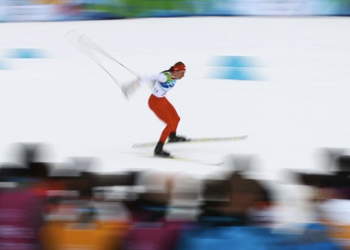 After failing to place in the women’s 10k on Monday, Justyna Kowalczyk is set to race again today at Whistler Olympic Park in the women’s sprint. In addition to looking for a place on the podium, Poland’s top Olympian will be fighting her own anxieties and seeking to silence critics in today’s race. She has won two sprint events this year already in the World Cup of cross country skiing, and a total of seven podium places. It is one of her stronger events, while Kowalczyk’s closest World Cup rival, Petra Madjic, is the favourite today.

Kowalczyk will have to steady her nerves to succeed after getting off to a shaky start at this year’s games. She was visibly agitated before Monday’s race, fighting off tears, voicing concerns about track conditions, and criticising the course, which is in her opinion too easy, with long, shallow curves that favour traditional skiers. She has not been shy about expressing her dissatisfaction, raising some eyebrow and drawing fire from critics.

“This track is not for me. This track is not for the Olympics,” Kowalczyk said. “It was the first time in my life I’ve seen a track like that in the Olympics.” The Vancouver Sun, a local daily newspaper, published her remarks under the alliterative headline “Favourite flaps gums after fifth-place finish”, and Monday’s reported the response from silver medalist Kristina Smigun-Vaehi: “Blah, blah, blah, […] Why didn’t she push harder then?”

The track itself is unlikely to be a focus of concern in today’s short distance event, but the weather could be. Erratic, warm conditions in the temperate, seaside city have caused problems in several events, creating a logjam in rescheduled alpine events as organisers struggle to keep snow on the courses. Polish biathlete Tomasz Sikora had a particularly unlucky first event, as he had to shoot in a sudden, short-lived, heavy, wet snowstorm which slowed the course under him, then immediately cleared as he approached the finish line.

While today’s event presents Kowalczyk with her second opportunity to medal, it is the long-distance events later in the week that will allow her to showcase the strength, endurance, and steely willpower that have set her so far ahead of Madjic in the World Cup standings. At present, Kowalczyk towers over the field with 1595 points, with Madjic in second, with 1191.

Nevertheless, Kowalczyk has made it clear that she is out to demonstrate to the world what she can do on the Olympic stage. She announced to her team after Monday’s race “I’ll show them all yet.”

The event will be televised on Eurosport and TVP 2 with the first round beginning at 19:15 CET and the final at 22:45 CET